Young nurse, Gemma, is struggling with the traumas she has witnessed through her job in the NHS. Needing to escape from it all, Gemma agrees to help renovate a rundown farmhouse in Doullens, France, a town near the Somme. There, in a boarded-up cupboard, wrapped in old newspapers, is a tin that reveals the secret letters and heartache of Alice Le Breton, a young volunteer nurse who worked in a casualty clearing station near the front line.

Set in the present day and during the horrifying years of the war, both woman discover deep down the strength and courage to carry on in even the most difficult of times. Through Alice’s words and her unfailing love for her sweetheart at the front, Gemma learns to truly live again.

The events of The Great War continue to both fascinate and beguile us and even now, a hundred years from the end of the war, memories linger and emotions run deep.

When young nurse, Gemma, escapes to France from the pressure of being a trauma nurse in the modern day NHS, her story intertwines with that of Alice, a young VAD working at a casualty clearing station in northern France during some of the most momentous years of WW1.  Alice's story comes to light when Gemma uncovers a stash of hidden letters during the renovation of a neglected farmhouse.

The parallels between the past and the present are nicely done and I enjoyed it when the alternate chapters gave us the story of both of these strong young women. That they have been touched by tragedy comes across and it was interesting to see how both of them coped with the difficulties life had placed before them.

The dual time element is strong, with some fascinating and quite poignant detail about what happened at the casualty clearing stations, when young men, so dreadfully damaged in both mind and body were patched up, to be either sent home if they were lucky, or hurried back to more fighting if they weren't so fortunate as to sustain a blighty, an injury which would, hopefully, see the end of their own personal war. However, in the midst of this horror, Alice discovers, that some relationships, despite the tensions and the danger and the petty bureaucracy which hindered personal contact, are worth fighting for. Gemma's story, in the here and now, with her struggle to discover what she truly wants from life, is equally fascinating, and the author does a great job at separating the two time frames so that both story lines feel fresh and relevant.

We are coming up to the hundred year anniversary of Armistice, a time, when the poppy fields of northern France will, once again, take on special meaning. The significance of the symbol of scarlet poppies blowing gently in the breeze is a constant reminder of those who died too young.... and far too soon. 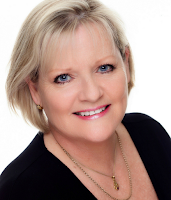 Deborah Carr lives on the island of Jersey in the Channel Islands with her husband, two children and three rescue dogs. She became interested in books set in WW1 when researching her great-grandfather's time as a cavalryman in the 17th 21st Lancers.

She is part of ‘The Blonde Plotters’ writing group and was Deputy Editor on the online review site, Novelicious.com for seven years. Her debut historical romance, Broken Faces, is set in WW1 and was runner-up in the 2012 Good Housekeeping Novel Writing Competition and given a 'special commendation' in the Harry Bowling Prize that year. The Poppy Field is her second historical novel.