Blog Tour ~ The Light in the Dark : A Winter Journal by Horatio Clare

As November stubs out the glow of autumn and the days tighten into shorter hours, winter’s occupation begins. Preparing for winter has its own rhythms, as old as our exchanges with the land. Of all the seasons, it draws us together. But winter can be tough.

It is a time of introspection, of looking inwards. Seasonal sadness; winter blues; depression – such feelings are widespread in the darker months. But by looking outwards, by being in and observing nature, we can appreciate its rhythms. Mountains make sense in any weather. The voices of a wood always speak consolation. A brush of frost; subtle colours; days as bright as a magpie’s cackle. We can learn to see and celebrate winter in all its shadows and lights.

In this moving and lyrical evocation of a British winter and the feelings it inspires, Horatio Clare raises a torch against the darkness, illuminating the blackest corners of the season, and delving into memory and myth to explore the powerful hold that winter has on us. By learning to see, we can find the magic, the light that burns bright at the heart of winter: spring will come again.

Marking the change of season as we go into winter is always a time for contemplation as days become shorter and the dark takes over. Moving to the rhythm of the seasons doesn't always come easily to us, as deprived of light we can struggle to make sense of the world around us. For this author the answer to his difficulty in adjusting to the dark days was to keep a diary of his thoughts, feelings, observations and actions.

On the book's journey, we go from the onset of winter, in October, to the beginning of spring. in March, where the lyricism of the words and the author's natural skill in observation takes you completely into his world. His relationship with his partner, his children and his mother, his upbringing in Wales, all play a central role in the careful way the book evolves.

Throughout the book there's a real magical quality to the imagery, the author has such a lovely way with words and brings scenes and emotions vividly to life. I found that I spent some time going back over particular sentences because they were so lovely.."..a word containing a silver moon and the crackle of burning twigs, flying things and Kings led by stars, berries, gold and pheasant feathers" conjured Christmas quite perfectly.

Throughout  The Light in the Dark the authors bares his soul and I found that to be quite an emotional experience. I appreciated his honesty in the way he deals with, and shares, his darker moments and rejoiced when everything seemed to be on a more even keel for him and his family.

There is much to reflect upon in this Winter Journal, particularly if you too struggle with darker days, however, as the author reminds us, "Spring will come. It will come"

Horatio Clare is a critically acclaimed author and journalist. His first book, Running for the Hills: A Family Story, won the Somerset Maugham Award. His second book, Truant is ‘a stunningly-written memoir’, according to the Irish Times. A Single Swallow: Following an Epic Journey from South Africa to South Wales, was shortlisted for the Dolman Travel Book of the Year; Down to the Sea in Ships: Of Ageless Oceans and Modern Men won the Stanford-Dolman Travel Book of the Year 2015. Horatio’s first book for children, Aubrey and the Terrible Yoot, won the Branford Boase Award 2016 for best debut children's book. He lives in West Yorkshire. 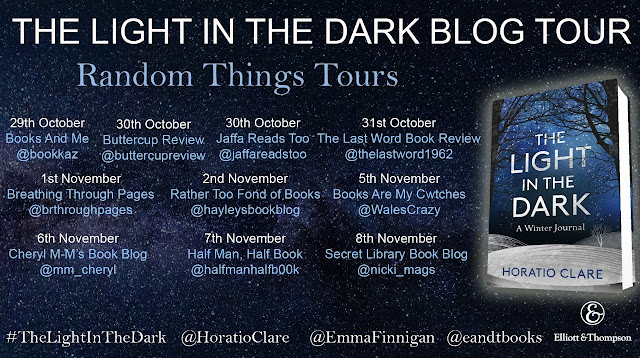