Hi Alan, a very warm welcome to Jaffareadstoo. Tell us a little about yourself and how you got started as a writer?

Purely by accident! I had taken early retirement from my job as an IT Manager and suddenly my hands began to cause problems – I was in a lot of pain. After some hospital investigation it seemed that after many years of keyboard use every day, my hands simply needed some exercise. Nothing seemed to work so I began to use my laptop again. I started to write short stories – I had something published in Lancashire Life and a few other magazines and it really just went on from there.

Your books are written in North West England – how have the people and its landscape shaped your stories?

The North West has played a big part in all my work so far. I was always taught to write about things I know about – rather than talk about things or places I hadn’t experienced. I based my books in a fictional Lancashire town called Wishton – which is made up from WIgan, Saint Helens and BoltON. Mining plays a big part in all the stories – my grandfathers were both miners and I worked for a Mining Machinery Manufacturer for nearly 40 years.

Not really. I worked in IT for nearly 40 years so was quite comfortable with using social media and I set up my own website. I’ve had feedback from people in Australia, India and the US. I also was lucky enough to be featured in a few magazines and had interviews on local radio. The only problem I had with marketing is that I didn’t really work hard enough! I think my publishers were a bit frustrated with me.

I try to visit every place I write about – going back to my earlier point about experiencing things and places first hand rather than making them up. Hopefully it sounds more realistic. I have been lucky enough to travel all over the world during my career and I have tried to incorporate some of those travels in my work. For example, although my second book is based mainly in the North West, a lot of the action takes place in Russia. I worked in Moscow and Siberia and the opening chapter of my second book describes a mugging in Red Square – something similar actually happened to me and a colleague one day!

I think it’s the people that make it special. As I have said earlier, a lot of the people in my books are miners or members of the mining community. This way of life has obviously disappeared now but the legacy sort of still remains. Apart from that, it is getting harder to “sell” the North West as a place to live. We have fabulous scenery and great people – but the region continues to be treated badly by central government. I’m quite passionate about still putting Lancashire on my letters – I don’t think the whole “Greater Manchester” change has helped any part of the region outside central Manchester. Flipping eck – that all sounds a bit gloomy doesn’t it!

I don’t really interact with anyone! A big part of my job involved a lot of travel – usually by myself. So I became quite comfortable with my own company and this seems to have followed me into writing!

How supportive are local communities to your writing and are there ever any opportunities for book shops, local reading groups, or libraries to be involved in promoting your work?

I’ve been interviewed twice on local radio and appeared in a couple of local magazines. I got my “big break” when a local radio presenter offered to put my first book forward to his publisher. Apart from that – I’m sure that local groups would be more than willing to help me promote my work but sadly I’m just too lazy to chase them up! I’m lucky enough to be able to treat writing as a hobby. I’m quite professional in my approach to writing – to research and editing but once the book is finished and ready to be published – I tend to lose interest a bit. I don’t really like chasing publicity so I tend to concentrate on my next book. Must drive my publisher mad!

Can you tell us anything about your current work?

The last book I did was for a local charity – “Joseph’s Goal” and although I really enjoyed writing it, I put quite a lot of effort into the whole process and to be honest it sort of put me off writing for a short while. But I knew it wouldn’t last! I’ve done most of the research work for my next book and I’m sort of getting ready to write the first line. I’m quite excited about it because it’s a complete departure from anything I’ve done before. It will be mainly set on a small Scottish island and hopefully will cover topics as diverse as the IRA and pop music!

You can find out more about his writing: 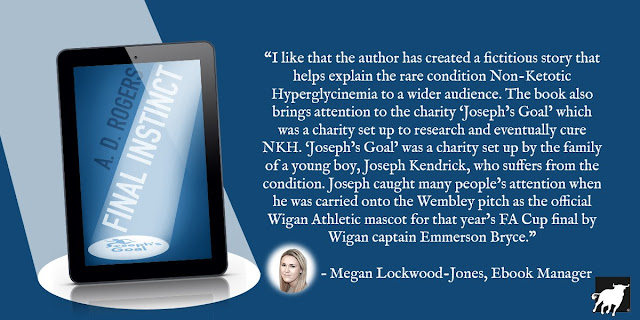