This is a book about a man’s relationship with hawks, and his self-education as a falconer, and about his discovery that despite his Asperger’s Syndrome, which hampers his normal social interactions, he can forge a loving bond with the young son he thought he had lost. He rediscovers his full humanity through his commitment to the training of falcons and his love of the natural world.

I'm occasionally lucky to see small birds of prey soaring in the sky, carried on gentle wind currents, they don't come too close, although, once a hapless pigeon was attacked by a sparrow hawk in our garden, which was a sight to behold, but mostly they keep their distance. Viewed close up any kind of hawk is a beautiful creature and superbly built for predation and its necessary survival.

In Blood Ties, author, Ben Crane shares his extraordinary ability to work with these very special birds and his skill as a falconer and his genuine love for hawks comes across in his beautifully written memoir, which takes us from the untamed landscape of the Sindh province in Pakistan, through to the picturesque charm of an English woodland. Throughout the book, the majesty and natural ability of hawks, the glorious detail of the birds in flight, and of the trials and tribulations of hand rearing hawks, comes across with a lyrical quality, which is, at times, quite mesmerising.

Running alongside Ben Crane's passion for these beautiful birds is the way in which he learned how to communicate with his son and their shared interest in the way that hawks interact allowed them the space and time to get to know each other. Seeing how the author copes with his Asperger's makes the book all the more poignant reading. Ben Crane is a very modest author, and yet, the strength of his words, his natural ability as a writer and his genuine love for the falcons he trains made this memoir such a fascinating and very special book to read. 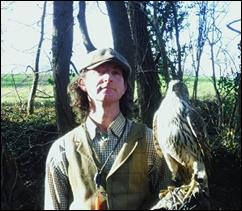 Ben Crane is a photographer, falconer and art teacher based in the Shropshire countryside.

After failing his A Levels, Ben began night school to pursue his love of art, going on to study a BA in Fine Art in Coventry, an MA at Winchester School of Art and a post graduate teaching certificate from Cambridge University. Ben spent his early career as a school art teacher before turning to freelance work as a photographer and artist selling his art at shows all over the country. Ben is the author of Sparrowhawks: A Falconer's Guide and rehabilitates birds of prey to return them to their natural hunting environment.