Hope Anderson is at a crossroads. At thirty-six, she's been dating her boyfriend, an orthopedic surgeon, for six years. With no wedding plans in sight, and her father recently diagnosed with ALS, she decides to use a week at her family's cottage in Sunset Beach, North Carolina, to ready the house for sale and mull over some difficult decisions about her future.

Tru Walls has never visited North Carolina but is summoned to Sunset Beach by a letter from a man claiming to be his father. A safari guide, born and raised in Zimbabwe, Tru hopes to unravel some of the mysteries surrounding his mother's early life and recapture memories lost with her death. When the two strangers cross paths, their connection is as electric as it is unfathomable . . . but in the immersive days that follow, their feelings for each other will give way to choices that pit family duty against personal happiness in devastating ways.

Hope Anderson faces the biggest dilemma of her life, not just in dealing with her own family problems but also considering if her long term boyfriend is going to be part of her future. Her family's summer house at Sunset Beach, North Carolina offers a sort of respite, and allows Hope the opportunity for some reflective time. When she meet the enigmatic, Tru Walls on one of her solitary beach walks, Hope feels an instant connection to him and even though Tru is only visiting Sunset Beach for a short time, the attraction between these two strangers is powerful and all consuming.

There is no doubt that the author writes this type of romantic fiction extremely well. Both Hope and Tru are such well drawn characters that you can't help but fall headlong into their respective stories, and both are equally compelling with neither one seeking to outshine the other. I'm not a great believer in the idea of love at first sight, sexual attraction and lust most certainly, but deep love, I'm not sure, and yet, every moment of Every Breath certainly lends itself to the idea of falling in love at first sight and the author has done a great job of convincing me that it really can happen.

There's an aching vulnerability to the story which I found quite charming. I have to admit that there were several times when emotion got the better of me and I found that I was reading with glistening eyes and a deep wish that all would work out for both Hope and Tru. What happens throughout the course of their respective stories is a sensitive exploration into the susceptibility of human emotion  and of the overwhelming power of love in all of its many guises.

The beautiful area around Sunset Beach is wonderfully described and the Kindred Spirit mail box on Bird Island actually exists, of course, I had to google it to see it for myself and spent a long time looking at images and stories. The importance of Kindred Spirit is revealed as the story progresses so I won't spoil that for you.

There's something about this author's work which warms my soul and I know that he will never let me down by writing a story which doesn't pull at my emotions from the very beginning. Every Breath is every bit as good a story as I hoped it would be, with an ending which left me an emotional wreck 💔

With over 105 million copies of his books sold, Nicholas Sparks is one of the world's most beloved storytellers. His novels include thirteen no 1 New York Times bestsellers including The Notebook which was no 1 in the New York Times for 18 months. All Nicholas Sparks' books have been international bestsellers and have been translated into more than fifty languages. Eleven of Nicholas’s novels have been adapted into major Hollywood films starring Hollywood Greats including Kevin Costner, Richard Gere, Ryan Gosling, Channing Tatum, Zac Efron, Robin Penn Wright, Miley Cyrus and Liam Hemsworth. Films include: The Notebook (Ryan Gosling), Message in a Bottle (Kevin Costner), Dear John (Channing Tatum), The Longest Ride, The Best of Me, Safe Haven, The Lucky One (Zac Efron), The Last Song, Nights in Rodanthe (Richard Gere), A Walk to Remember, and The Choice. 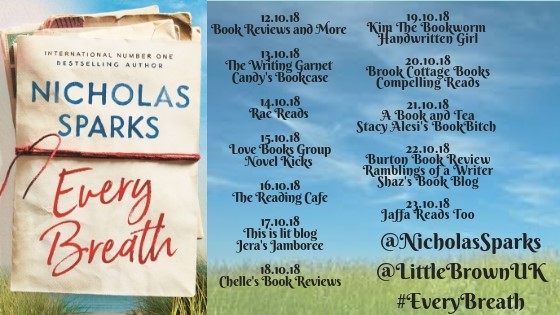