On Hist Fic Saturday I am delighted to welcome to the blog, best selling author 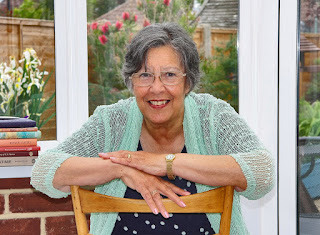 It's a real thrill to have Pam as my guest on the blog today sharing her thoughts about why she writes historical fiction..

My mother was a great story teller. I grew up listening to her tales from the past. Neither of us realised but she was doing the foundation work upon which I would start to build my reputation. I would listen to the same story over and over again and never get tired or bored. She’d create the scene, explain the dilemma, build the story to a crescendo but always leave me with a satisfying conclusion.

Was story telling in my genes? The truth is, I have no idea. My mother adopted me.

My mother was born in 1912 and life was very different back then. However her story telling was so vivid I felt like I could have been there. I quickly learned that no matter when we are born, we all have the same dreams, the same aspirations and the same longing to be loved and accepted. Because I loved her, I was always rooting for her in the stories she told. I felt the same indignation, the same pain of insult, the same frustration or the same glow of romance as she spoke. It was only as I grew older, I realised that as a child of the 1950’s and 60’s my attitudes and opinions were shaped in a different forge. It wasn’t long before I would cry, ‘You never should have put up with that, Mum,’ or ‘I would have told her to sling her hook.’ And she would just smile and say, ‘That’s the way things were back then.’

I never did have any great love for the dry facts of history but I am fascinated by the people. What made them tick? Why did they accept patterns of behaviour that we would never condone nowadays? When I write, it’s great fun to imagine myself in the same room as my character, but thanks to the years of listening to those often repeated stories, I know I have to be very careful to leave my 21st century mind, attitude and conditioning away from the page.

In my first book, my character stayed with her pig of a husband and tried to make the best of it. A reader told me that she’d lost patience with her. ‘What an absolute wimp!’ she complained angrily. ‘Why on earth didn’t she just walk out on him?’ I would say, the answer to that question is simple.

In this day and age, any wife leaving her husband can find support outside the marital home. The women of my mother’s generation had no such luxuries. A woman couldn’t even rent a flat without the signature of a male guarantor on the agreement. The man might be her local doctor or bank manager but I would hazard a guess that those men would be far more likely to tell her to go back home and be a dutiful wife, than they would be willing to stand surety for her. And if she had children - Oh, don’t get me started on that one!

There’s been plenty written about kings and queens or notables in high places but I’m more interested in the unrecorded people of history and the ordinary women who in turn became extraordinary – like my mother. I my humble opinion, they were the ones who really won the war. The men may have been fighting, but the women kept the country going, brought up the next generation and found a strength of character which is still much admired. To fully comprehend what that meant, as I write, I try to immerse myself in their times. And what fun that can be.

We are lucky enough to have a wealth of research material at our fingertips. The Internet, the local library, and old newspapers have given me a real insight into the ordinary life of the time. Added to that, the rest of the world and his wife have written their memoirs. Best of all, I love talking to the people from that generation. It’s wonderful when they’re in full flow and then they say something in all innocence which gives me a real insight into their lives. I remember a 90 year old telling me that during the war, all the petrol they used on the farm was tainted pink. ‘If you were caught using pink petrol in your car,’ she went on, ‘you’d be in big trouble.’

‘Oh that didn’t bother us,’ scoffed her 93 year old friend sitting next to her. ‘We used to filter our petrol through the gas mask. When it came out the other end, it was normal colour.’

So why do I write historical fiction? First and foremost because I love it and then because you learn something new all the time.

Pam Weaver is a bestselling author of saga novels set in Worthing, including There’s Always Tomorrow, Better Days Will Come, Pack Up Your Troubles, For Better For Worse, Blue Moon and Love Walked Right In. Pam’s inspiration comes from her love of people and their stories and her passion for the town where her novels are set. She is married with two grown-up daughters and lives in Worthing.

A German aircraft crashes into a house in Worthing, and causes complete devastation to the local community. Three strangers meet for the first time that day – Pip, Stella and Lillian. Lillian’s little girl Flora has been hurt in the crash and is rushed to hospital. As she comes through her ordeal, she finds her mother and her two new ‘aunties’ by her bedside.

The three new friends quickly bond over shared experiences; all their husbands are overseas in the fighting forces. They also have the same love of singing and soon form The Sussex Sisters, Worthing’s answer to the Andrews Sisters, to boost morale in in dance halls and canteens all over the south coast.

When D-Day finally arrives, it’s the promise of a brighter future they have all been longing for. But the men that return home are altogether different from the husbands they waved off. How will they respond to their wives’ new-found fame? How will the women live alongside these distant, damaged men? With secrets, revelations and surprises on the horizon, the friends will need each other more than ever.

Huge thanks to Pam for being such  a lovely guest on my blog today and for sharing her love of writing historical fiction with us.


You can discover more about Pam's bestselling sagas by clicking here