Blog Tour ~ Call of the Curlew by Elizabeth Brooks

What's the story about...

Virginia Wrathmell has always known she will meet her death on the marsh.

It’s New Year’s Eve 2015 and eighty-six year old Virginia Wrathmell feels like the end is upon her. As she lookout on the dark and desolate marshes that surround the house she’s lived in since she was young, Virginia is overcome with the memories of one winter that have stayed with her since childhood.

It’s New Year’s Eve 1939 and Virginia is eleven, an orphan arriving to meet her new parents at their mysterious house, Salt Winds, on the edge of a vast marsh. War feels far away out here amongst the birds and shifting sands- until the day a German fighter plane crashes into the marsh. The people at Salt Winds are the only ones to see it.

When her adopted father goes missing, and a mysterious stranger arrives in his place, Salt Winds becomes a very dangerous place to be. Virginia’s failure to protect the house’s secrets will leave her spending a lifetime dealing with the aftermath.


Call of the Curlew begins at Salt Winds, on New Year’s Eve in 2015, as eighty-six year old Virginia Wrathmell takes stock of her life. Her discovery of a fragile bird’s skull seems to act as a portent and a catalyst for what happens next.

Moving seamlessly between two time frames, the story starts in 1939 when Virginia was first taken to live at the house on the marsh. Adopted by childless couple, Clem and Lorna Wrathmell, Virginia makes her home with them on the edge of Tollbury Marsh in the house known as Salt Winds. The salt marsh around the house is an eerie and disquieting sort of place and Virginia is warned never to go onto the marsh as the shifting sands are potentially lethal.

There’s a strange sort of atmosphere about Salt Winds, which comes not just from its occupants, although, there is no doubt that, Clem and Lorna an odd couple, but it is also in their unusual involvement with their neighbour, Max Deering, which adds an extra and rather creepy dimension to the story. There’s a real sense of uneasiness in the way that Salt Winds seems to enfold everyone in a web of silence and this air of disquiet never really goes away, creeping insidiously throughout the whole of the story like a ghostly wraith.

There's a dark secret at the heart of the novel, a moment fractured in time when the atmosphere in the house stood still and lives were changed on a whim. I was so emotionally connected to the characters by this point that I felt the change quite acutely, and such is the pull of the story that I couldn't help but wonder what would have happened had another choice been made.

Beautifully written from start to finish, Call of the Curlew has a wonderfully melancholic air about it which captures the very essence of the place and the people so perfectly that there is never a moment when the story doesn’t come alive. The brooding nature of the marsh nestles alongside that of the house itself which is such an integral part of the plot that Salt Winds becomes a vital and important character in its own right.

There is no doubt that Call of the Curlew is a stunning debut. From the beauty of its evocative cover, to the glory of its content, it is one of those special stories which, as you read, makes time stand still, so that you forget the here and now and escape willingly into the magic of a good story, beautifully told.

ELIZABETH BROOKS grew up in Chester, and read Classics at Cambridge. She lives on the Isle of Man with her husband and children. Elizabeth describes herself as a “Brontë nerd”; Call of the Curlew is her homage to the immersive and evocative writing of Charlotte Brontë. 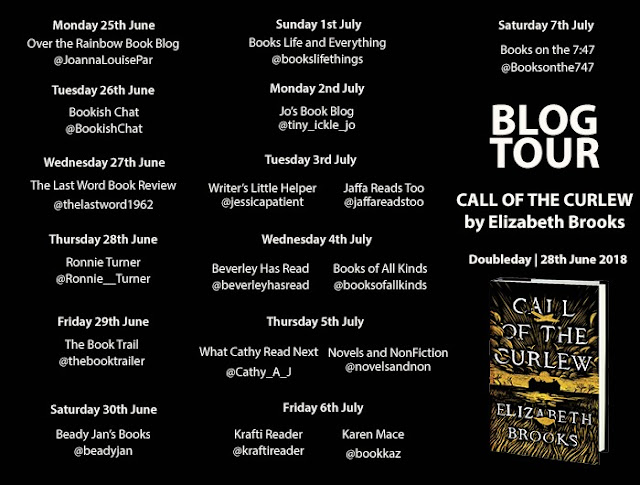