“She burned too bright for this world.” 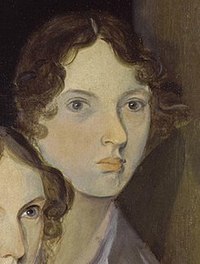 Emily Jane Brontë was born on July 30th 1818 in Thornton, a suburb of Bradford. In 1820, she and her family moved to the small town of Haworth which snuggled into a corner of the wild Yorkshire Dales.

Emily's father, Patrick took over as minister at the church of St Michael’s and All Angels and the Brontë family moved into the adjacent parsonage.

In August 1824 Patrick sent Charlotte, Emily, Maria and Elizabeth to the Clergy Daughters' School at Cowan Bridge in Lancashire. Charlotte always maintained that the school's poor conditions permanently affected the girls' health and physical development, and hastened the deaths of Maria (born 1814) and Elizabeth (born 1815), who both died of tuberculosis in June 1825. After the deaths of their older sisters Patrick took Charlotte and Emily away from the school.

When Emily was seventeen, she attended Roe Head Girls' School, where Charlotte was a teacher but managed to stay only a few months before being overcome by a longing for home.

Back at the Howarth Parsonage, Emily and her surviving siblings Charlotte, Anne and Branwell escaped into a fictional world, where they made up stories to entertain each other. These fictional escapades laid the foundation for what was to come.

Emily Brontë's novel Wuthering Heights was first published in 1847 by Thomas Cautley Newby appearing as the first two volumes of a three-volume set that included her sister, Anne's novel, Agnes Grey. The authors were printed as being Ellis and Acton Bell; Emily's real name did not appear until 1850.


Tragically, the Brontë family suffered the deaths of three of its members within eight months. In September 1848 Branwell died of an illness made worse by heavy drinking, although Charlotte believed that his death was due to tuberculosis. Emily became seriously ill shortly after Branwell’s funeral and died of pulmonary tuberculosis in December 1848. Anne died of the same disease in May 1849 and Charlotte died in March 1855 possibly of tuberculosis, or typhus.


All these images were taken on a visit to Haworth were I spent time in the shadow of the Brontës, thus making the beauty of their literature come alive in my imagination.

“I have dreamt in my life, dreams that have stayed with me ever after, and changed my ideas; they have gone through and through me, like wine through water, and altered the colour of my mind. And this is one: I'm going to tell it - but take care not to smile at any part of it.”