Blog Tour ~ Her Name Was Rose by Claire Allan

This new Irish voice is bursting onto the scene with her first foray into the thriller genre. This promises to be one of the most exciting debuts of 2018. Perfect for fans of Lianne Moriarty, B. A. Paris, Gillian Flynn and Marian Keyes.

Her name was Rose.
You watched her die.
And her death has created a vacancy.

When Emily lets a stranger step out in front of her, she never imagines that split second will change her life. But after Emily watches a car plough into the young mother – killing her instantly – she finds herself unable to move on.

And then she makes a decision she can never take back.

Because Rose had everything Emily had ever dreamed of. A beautiful, loving family, a great job and a stunning home. And now Rose’s husband misses his wife, and their son needs a mother. Why couldn’t Emily fill that space?

But as Emily is about to discover, no one’s life is perfect … and not everything is as it seems.

And here's what I thought about it..

This clever psychological thriller grips from the dramatic opening which introduces us to Emily D'Arcy, who after witnessing a fatal accident is left reeling with disbelief. When she discovers more about, Rose Grahame, the victim of the accident, Emily soon becomes totally immersed in Rose's life, to the point where she is completely obsessed with needing to find out more and more about her.

What then follows is a skilfully crafted psychological suspense story which has more than enough twists and turns to keep the reader guessing. The story gets off to a bit of a slow start but as Emily gets more and more involved in the seemingly perfection of, what was once, Rose's life, so the mystery at the heart of the novel starts to pull ever tighter.

I really enjoyed the hidden depths of this story, the characters, in particular, come bouncing into life, especially, Cian, Rose's widowed husband, who is a forceful presence from the start. However, it is the other characters, who Emily finds herself involved with, who add an interesting dimension to the overall complexity of the story.

I can't say too much about the plot and its eventual outcome as that would spoil it and this story is one you need to read without any spoilers from me but what I will say is that Her Name was Rose is an enjoyable escape into a complex world of secrets and lies and is a great holiday-by-the pool sort of read.

Married with two children, two cats and a mad puppy she is happiest lost in a good book. She has kissed Michael Buble. 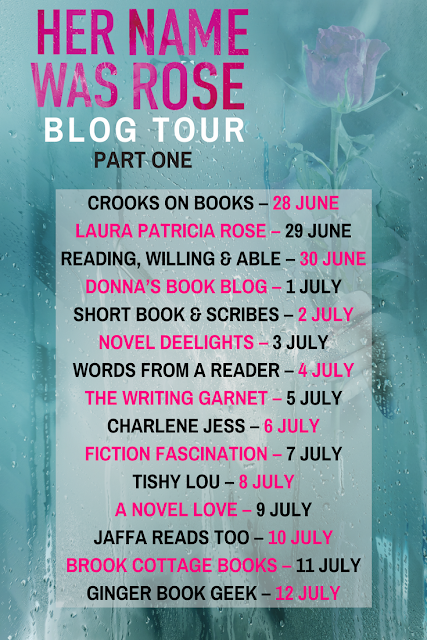