Audrey Hart is on Skye to collect the folk and fairy tales of the people around her. The crofters, facing dire poverty after the clearances, are suspicious and hostile to a stranger, claiming they no longer know their fireside stories. But then the body of a young girl is washed up on the beach, and the crofters reveal it is only a matter of weeks since another girl disappeared. They are sure the girls are the victims of the restless dead: spirits who take the form of birds.


The folklore of our British Isles is in the fabric of our bones and in the call of the wind. And clustered around our firesides we hear, in the crackle of the wood, the whisper of the old folk and of the customs and traditions which shape our past, and which, if not for the teller of tales would have been lost a long time ago.

Audrey Hart takes up employment on the Isle of Skye, with Miss Buchanan, an enigmatic woman who is collecting the ancient folklore before the island stories are forgotten and in her search for the old tales, Audrey discovers that the islanders, whilst bound by their own sense of superstition, also hide dark secrets.

Imaginatively written, and so beautifully descriptive of nineteenth century life on the island, that the shrieking of the birds, and the drift of the copper brown dulse that litters the shoreline, comes gloriously to life. There's also a deliciously, creeping menace to the story which really draws you into this rather dark and dour place, and there is also a very strong impression that times are changing for these remote islanders. Over the 18th and 19th centuries the Scottish clearances decimated isolated communities, making the islanders who have remained on Skye, cautious and distrustful of strangers and averse to giving up their secrets easily.

The Story Keeper is a real tribute to the power of storytelling. It’s a generous nod towards the old keepers of our tales and customs who have for generations passed on cautionary tales of little men who wait in the woods and of fairies and spirits who seek retribution for our misdeeds.

Hauntingly beautiful from start to finish, The Story Keeper stays with you long after the last page of this story is turned and the book, with its beautiful cover, is gently placed down.


Anna Mazzola's first novel, THE UNSEEING, was published to critical acclaim in 2016. She is a criminal justice solicitor and lives in London with her husband and two children. 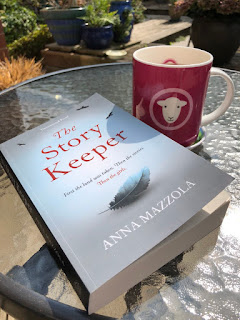