One of my favourite WW1 poems is My Boy Jack by Rudyard Kipling and over Christmas I had the opportunity to watch the film version of My Boy Jack, starring David Haig and Daniel Radcliffe, which highlights Rudyard Kipling's search for his missing son - eighteen year old Jack Kipling was missing, presumed killed during the Battle of Loos in September, 1915. 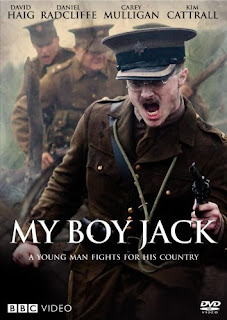 John Kipling was born in Sussex 1897, the youngest of the three children born to Rudyard Kipling and his American wife, Caroline Starr Balestier. John, known as Jack, was educated at Wellington College, Berkshire.

Jack was sixteen when war broke out in 1914, and carried along by the fervour of his father who was a staunch supporter of the war, Jack, tried to enlist as soon as he was old enough, but he was unfortunately turned down by both the navy and the army due to his very poor eyesight.

However, Rudyard Kipling was keen for his son to see active service and using his considerable influence, he was able to persuade, Frederick Roberts, 1st Earl Roberts, a former Commander-in-Chief of the British Army, and Colonel of the Irish Guards to bypass this disability and Jack was commissioned as a second lieutenant into the 2nd Battalion, Irish Guards on 15 August 1914, having just turned 17.

After his initial training. Jack Kipling was sent to France in August 1914 and was reported as missing in September 1915, during the Battle of Loos. His body was never found and although he is officially listed as buried in St Mary's ADS Cemetery in Haisnes, there is still doubt as to whether this is indeed his final resting place.

Rudyard Kipling never recovered from the lost of his son and following this devastating tragedy his attitude towards the war changed. This poem to his missing son was also a tribute to the many other young men lost during the war -

("The Honours of War"—A Diversity of Creatures)

These were our children who died for our lands: they were dear in our sight.

We have only the memory left of their home-treasured sayings and laughter.

The price of our loss shall be paid to our hands, not another’s hereafter.

Neither the Alien nor Priest shall decide on it. That is our right.

But who shall return us the children?

At the hour the Barbarian chose to disclose his pretences,

And raged against Man, they engaged, on the breasts that they bared for us,

They bought us anew with their blood, forbearing to blame us,

Those hours which we had not made good when the Judgment o’ercame us.

They believed us and perished for it. Our statecraft, our learning

Delivered them bound to the Pit and alive to the burning

Whither they mirthfully hastened as jostling for honour—

Nor since her birth has our Earth seen such worth loosed upon her.

Nor was their agony brief, or once only imposed on them.

The wounded, the war-spent, the sick received no exemption:

Being cured they returned and endured and achieved our redemption,

Hopeless themselves of relief, till Death, marveling, closed on them.

To corruption unveiled and assailed by the malice of Heaven—

To be senselessly tossed and retossed in stale mutilation

From crater to crater. For that we shall take expiation.

But who shall return us our children?

Kipling's poignant poem My Boy Jack was in fact written following the death of 16 year old sailor Jack Cornwell, but it is also a poignant reminder of the loss of his own boy, Jack.

"HAVE you news of my boy Jack? "
Not this tide.
"When d'you think that he'll come back?"
Not with this wind blowing, and this tide.

"Has any one else had word of him?"
Not this tide.
For what is sunk will hardly swim,
Not with this wind blowing, and this tide.

"Oh, dear, what comfort can I find?"
None this tide,
Nor any tide,
Except he did not shame his kind---
Not even with that wind blowing, and that tide.

Then hold your head up all the more,
This tide,
And every tide;
Because he was the son you bore,
And gave to that wind blowing and that tide.