May 1665. With winter passed, Mercia Blakewood is at last headed back to England from America, hoping to leave behind the shadow cast by death and heartache. She expects a welcome from the King considering her earlier mission on his behalf, but the reception she receives after her long voyage home could hardly be called warm. With the country now at war with the Dutch, more manipulation lies ahead as Mercia must accept a clandestine role at the heart of the glittering and debauched royal court to unmask a spy and traitor.

This is now the third book in the historical series which features the female adventurer, Mercia Blakewood, and we meet her as she arrives back in England from America where she has been on a secret mission for King Charles II. Her arrival into the country is met with suspicion and doubt, that is, until she is taken to London and a clandestine meeting with the King's notorious mistress, Barbara Castlemaine.  Given the task of exposing a potential spy ring, Mercia must adopt an entirely new role and one which will place her and those she holds dear in grave danger.

This is a fascinating look at the profligate court of King Charles II and of the dangers which so often lingered in shadows. For Mercia, the task she is assigned is dangerous and filled with many obstacles, and yet, her strength of character sees her though the difficulties, and her ready wit and charm endear her to the reader. That she is also brave and quite fearless is also to her credit as Mercia is no simpering courtesan and is more than a match for any of the men and women who try to thwart her.

The mystery, at the centre of the story is well thought out, and there are more than enough twists and turns to keep the adventure alive in the imagination. I found it quite refreshing to have a female lead protagonist who didn’t conform to the usual rigid protocols which were so evident at this time in history.

Traitor is an intriguing journey into the political arena of the mid-seventeenth century. The wars with the Dutch and the fast growing slave trade form the backdrop to an interesting and lively historical adventure.

Those readers who have followed this series from the beginning will find much to enjoy in this latest story, and for new readers, well, my advice would be to start the series from the beginning with, Birthright, as even though it is entirely possible to read Traitor as a standalone story, there are references to back events which may seem a little confusing without prior knowledge.

Originally from the West Midlands, David Hingley worked in the Civil Service for eleven years before leaving to fulfill his long term ambition to write. He spent three years living in New York'close to the action in Birthright and Puritan, before returning to the UK in 2016.

Do visit the other tops on the BlogTour 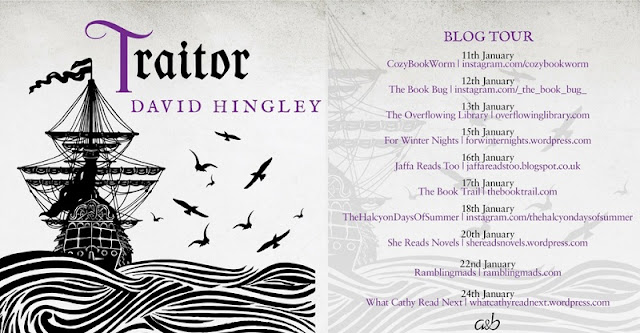