Jaffareadstoo is delighted to be part of the blog tour

Fifty-something Shona is a proud former pupil of the Marcia Blaine School for Girls, but has a deep loathing for The Prime of Miss Jean Brodie, which she thinks gives her alma mater a bad name.

Impeccably educated and an accomplished martial artist, linguist and musician, Shona is thrilled when selected by Marcia Blaine herself to travel back in time for a one-week mission in 19th-century Moscow: to pair up the beautiful, shy, orphaned heiress Lidia Ivanovna with Sasha, a gorgeous young man of unexplained origins.

But, despite all her accomplishments and good intentions, Shona might well have got the wrong end of the stick about her mission. As the body count rises, will she discover in time just who the real villain is?


Shona McMonagle is employed as a librarian at the Morningside Library in Edinburgh, where she is proud to consider herself as one of the crème de la crème girls from Marcia Blaine's esteemed establishment. When Shona is approached by none other than the revered, Marcia Blaine herself, she is amazed to find that not only does Marcia Blaine know her name but also that she has an important time travelling mission for her.

I don't quite know where to begin trying to explain Miss Blaine's Prefect and the Golden Samovar as nothing I can say would do justice to this lively romp into the nineteenth century aristocratic world of Counts and Countesses, Prince and Princesses, and of afternoon tea served from a giant eagle embossed Samovar. And yet, however, bizarre this seems, the aptly named, time traveller,Shona Fergusovna, is even more unusual as she completely turns the ordered life of the Russian aristocracy upside down in her quest to discover a deadly secret.

Miss Blaine's Prefect and the Golden Samovar is one of those stories which shouldn’t be taken too seriously. It’s laugh out loud funny in places and so convoluted that I gave up trying to figure out where the story was going and just let the story evolve, which it does at a cracking pace. The characters are beautifully caricatured, especially the moneyed countesses who vie for Shona’s attention, and the beautiful, Lidia Ivanovna’s wonderful Nanny, who spends her time knitting colourful, Fichus to cover her young lady’s décolletage.

Original, funny and with a deliciously quirky edge, Miss Blaine's Prefect and the Golden Samovar is delightful from beginning to end and I can't wait to see where Shona's time travelling adventures take her to next. In the hands of this talented new author, the possibilities are endless.

Olga Wojtas was born and brought up in Edinburgh where she attended James Gillespie’s High School – the model for Marcia Blaine School for Girls, which appears in Muriel Spark’s The Prime of Miss Jean Brodie. She was encouraged to write by an inspirational English teacher there, Iona M. Cameron. Olga won a Scottish Book Trust New Writers Award in 2015 and has had more than 30 short stories published in magazines and anthologies.

The launch of this book is part of the Muriel Spark 100 centenary programme. More information on www.murielspark100.com 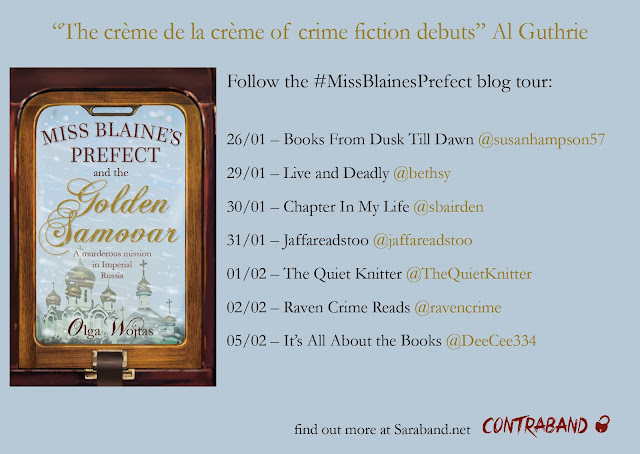