When eight year old Daisy Mason  disappears from a family barbecue no-one notices that she is gone, and even her parents don't remember the last time they saw her. How such a popular child can disappear without trace is the puzzle that DI Adam Fawley and his team of investigative officers have to make sense of, and with very few clues to work with the groundwork proves frustratingly difficult.

Close to Home introduces us to a new crime series and to the lead protagonist, DI Adam Fawley, who is an interesting character, supremely flawed like so many of these clever detectives, and we do get to know the reason why he is so troubled, however, what is paramount is his drive and ambition to get the job done. That he is constantly thwarted by this complex case makes for fascinating reading, and the numerous twists and turns in the plot, not only had the investigative team guessing, but also kept me on the edge of my seat. So many times I thought that I had the case cracked only to have it veer off in an entirely new direction which I didn't see coming.

Complex and convoluted, this intricately plotted psychological drama examines the background to the case and looks at the events leading up to Daisy's disappearance, whilst at the same time keeping the investigation alive in the imagination. There is so much I want to say about this story but to do so would give away too many clues and, believe me, this is one of those roller-coaster crime thrillers which needs to be read, in its entirety, without any spoilers from me.

The author certainly knows how to manipulate a complicated plot and the mystery at the heart of the novel makes for fascinating reading.  Daisy's family are such an integral part of the novel, and their faults and foibles are laid bare, so that, whilst they are largely an unlikable bunch, particularly Daisy's mother, Sharon, you can't help be drawn into the way they operate. I had an especial fondness for, Leo, Daisy's older sibling, who is fighting his own brand of demons.

Close to Home kept me in its grip from its poignant prologue, through to its dramatic and unexpected conclusion and is, without doubt, an exciting debut from a talented new author.

Do visit the other blog tour stops. 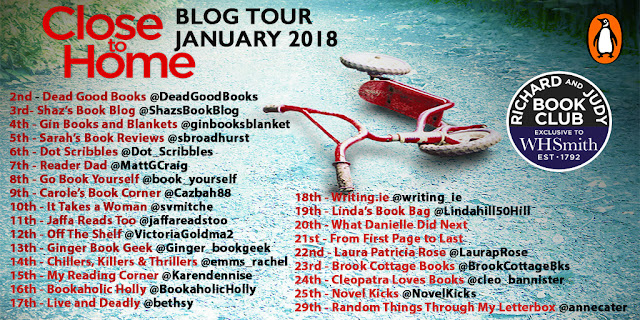 Cara Hunter is a writer who lives in Oxford, in a street not unlike those featured in her series of crime books. Close to Home is her debut featuring DI Adam Fawley, and her second, In the Dark, is coming soon.