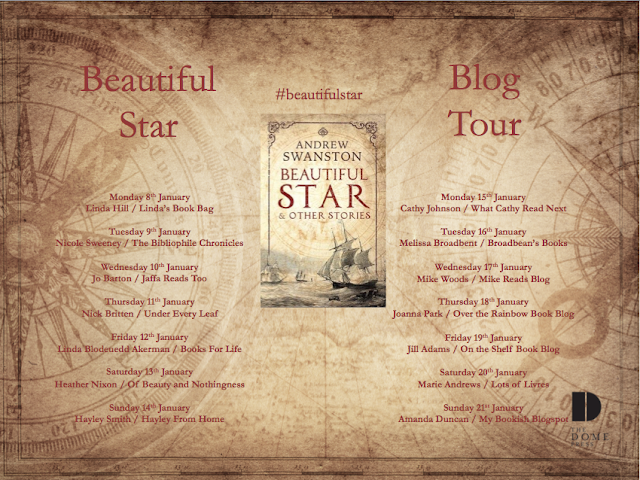 I'm thrilled to be able to share this fascinating guest post by the author of  Beautiful Star & Other stories,

In Beautiful Star, the title story of this collection, the narrator, Julia Paterson, tells her boat-loving, countryside-avoiding friend Willy Miller that flowers are not wild or tame, but just flowers. If I could borrow from Julia, I prefer to think that stories are not long or short, they are just stories, with beginnings, middles and ends.

And characters. Unusual, interesting characters. Julia is one of three narrators in these seven stories, and the only one who really existed. In A Witch and a Bitch, Jane Wenham’s granddaughter is fictional, as is Daniel Jones in HMS Association. They are both there to facilitate the telling of the story. The stories of the other five protagonists (there are two in The Button Seller and The Drummer Boy) are told in the third person. They just seemed to work better that way.

Here are two questions for you: in what year did the first recorded, manned flight take place? (No fables or magic allowed). And in what year was the last woman condemned to death for witchcraft in an English court? I ask because the questions illustrate the point that historical fiction should inform as well as entertain. Until I came across the stories of Eilmer, The Flying Monk and Jane Wenham, The Witch of Walkern (A Witch and a Bitch) I for one had no idea.

Nor could I have told you much about the magnificently named Admiral Sir Cloudesley Shovell, although his fate led directly to the solving of the problem of Longitude by the brilliant clockmaker, John Harrison. Or, indeed, about the gallant Lady Mary Bankes, mother of twelve, who led the defence of her home, Corfe Castle, during the War of the Three Kingdoms. If not the origin of the word ‘turncoat’ the story of The Castle certainly offers an early example of its use.

I prefer to work within the framework of historical events because it imposes a discipline that some other forms do not. This is relatively easy when the story is a footnote to a well-recorded major event (Waterloo, The War of the Three Kingdoms,), less so when the history is more distant or less clear (Eilmer, Jane Wenham).

There are two particular perks to being an historical novelist. First, one meets and talks with all sorts of experts, academics, librarians and local historians who are, without exception, unfailingly helpful and generous with their time and knowledge. And, second, from them and from written records, one is forever learning new and unexpected facts, such as that both sightings of what we call Halley’s Comet in 991 and 1066 presaged invasion, first by the Danes, later by the Normans. Eilmer saw it on both occasions.

Finally, I should mention The Tree, which is the shortest and most fanciful of the collection, despite being based on possibly the best-known event. Most of us know that King Charles II hid in the Boscobel oak after his defeat at the Battle of Worcester, but who was there with him?

It is the storyteller who has the chance to ask such questions and to suggest answers.

History is brought alive by the people it affects, rather than those who created it. In Beautiful Star, we meet Eilmer, a monk in 1010 with Icarus-like dreams; Charles I, hiding in 1651, and befriended by a small boy; the trial of Jane Wenham, witch of Walkern, seen through the eyes of her granddaughter.

This is a moving and affecting journey through time, bringing a new perspective to the defence of Corfe Castle, the battle of Waterloo, the siege of Toulon and, in the title story, the devastating dangers of the life of the sea in 1875.

Andrew’s novel, Incendium, was published in February 2017 and is the first of two thrillers featuring Dr. Christopher Radcliff, an intelligencer for the Earl of Leicester, and is set in 1572 at the time of the massacre of the Huguenots in France.

The Dome Press publish Beautiful Star, a collection of short stories documenting a journey through time, bringing a new perspective to the defense of Corfe Castle, the battle of Waterloo, the siege of Toulon and, in the title story, the devastating dangers of the life of the sea in 1875.