Review ~ coffee tea The Caribbean & Me by Caroline James

Coffee Tea The Caribbean & Me is the second book in the Coffee Tea series which began with Coffee Tea The Gypsy & Me, and which now continues the story, several years later, of Jo and her best friend Hattie. In this book , the story begins with Jo trying to rebuild her life after a devastating loss, and for those who haven't read the first book, I won't spoil anything here by revealing too much. Suffice to say, Jo and Hattie both need time away from Kirkton Sowerby and where better than to visit the Caribbean, ostensibly to visit Jo's son, Jimmy, who has recently relocated to Barbados, but also gives them time to mend their wounds and to take stock of their lives.

What then follows is a lovely story about the power of friendship, of comfortable days spent in the sun, of eating glorious food and drinking far too many cocktails, and enjoying light hearted flirtations. And yet there's also a lovely inclusion into the story of other characters especially Jo's other son. Zach, who is a talented , and it must be said, rather handsome Michelin starred chef. The author fills her characters with such warmth and wit and their delightful personalities shine through onto the pages of the story. I really liked spending time with them and thoroughly enjoyed seeing how the story eventually played out.


The very nature of Coffee Tea The Caribbean & Me lends itself to a continuation, however, the story also sits comfortably on its own merits and can be read as a standalone. It's a perfect read for a sunny afternoon in the garden or leisurely reading on a hot afternoon by a poolside, preferably, somewhere exotic.


Caroline James was born in Cheshire and wanted to be a writer from an early age, she trained, however, in the catering trade and worked and travelled both at home and abroad. Having lived in Cumbria for many years Caroline owned and ran a pub in Appleby followed by a country house hotel, south of Penrith and says that her time in Cumbria was the inspiration that led to her writing path.

Caroline's debut novel, Coffee Tea The Gypsy & Me shot to #3 on Amazon and was E-book of the Week in The Sun newspaper. Her second novel, So, You Think You're A Celebrity… Chef? has been described as wickedly funny: 'AbFab meets MasterChef in a Soap…' The manuscript for Coffee Tea The Caribbean & Me was a Top Ten Finalist at The Write Stuff, London Book Fair 2015 and the judge’s comments included: “Caroline is a natural story-teller with a gift for humour in her writing.” Her next novel, Coffee Tea The Boomers & Me will be published autumn 2016. 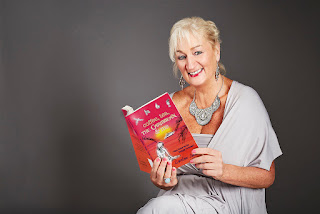 My thanks to the author for sharing her novel with me. 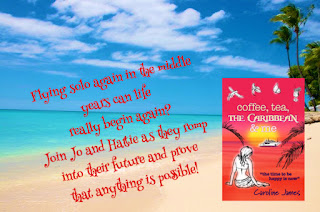