Blog Tour ~ The Way We Were by Sinéad Moriarty 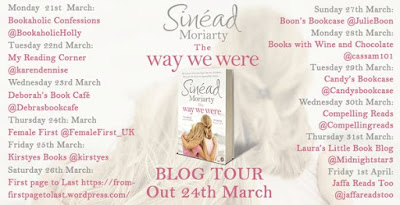 Hello Sinéad and a warm welcome to Jaffareadstoo.

Thanks for taking the time to answer our questions so thoughtfully....

Where did you get the first flash of inspiration for The Way We Were?

Back in the late 1980s Brian Keenan and John McCarthy, among others, were kidnapped and taken hostage in Beirut. They remained in captivity for over four years and when they were finally released the two men talked about this incredible friendship that had kept them sane. You could see the deep connection and love between them.
To this day they are best friends and the bond between them remains. I was always fascinated by this and by the fact that John McCarthy’s girlfriend campaigned so tirelessly to get him released and then when he was released everyone presumed they’d end up together…but in fact they broke up and he married someone else. I wanted to somehow write a book with some of these themes worked into the storyline.

The Way We Were is about a married couple, Ben and Alice, who have two teenage daughters and who love each other deeply but are going through a bump in their marriage. Like all relationships theirs has got a bit stale. Ben is feeling restless. He’s having a mid-life crisis. Is this it? He wonders. He feels his life has become mundane and is slipping through his fingers. He wants to shake things up, to feel vibrant again. Ben craves adventure and when someone offers him the opportunity to have that adventure he jumps at the chance. Ben’s fellow surgeon asks him to go to Africa, to Eritrea to operate with another colleague, Declan. Ben knows there is a risk involved as the country is very unstable, but he says yes. He knows Alice will be worried about him, he knows it’s a dangerous place but he can’t wait to go and experience something new with a fellow surgeon.Alice is furious and worried sick that something will happen to him. It turns out she was right and what happens next changes their lives forever. The book is really about love and the power of memories. Alice needs to forget Ben to survive and be a good mother to their daughters, but he clings to her memory to keep himself alive.  What will happen to their lives? Can Ben survive? Will they ever see each other again? If they do, can they possibly get back to the way they were?

Characters end up taking on a life of their own. You know your book is working when your characters start behaving in ways you hadn’t imagined. It means that the story has taken on its own momentum. I love when that happens. You do live with your characters all through each book and it  can be difficult to let go, but to be honest after many edits, copyedits and page edits, you are often happy enough to take a break from them all.

Probably Alice as she is a wife, mother and sister – all things that I am too.

A rainy day when I’m in my office and the words are flowing and I know my characters well and I feel confident that I know where the story is going. FYI, days like this are very rare!

Believe in yourself, don’t let knockbacks stop you achieving your goal, be passionate about your story, be disciplined and enjoy it!!

This will sound very odd but I’d like to design tennis clothes for women.

The Way We Were is out now in paperback