Juliana Milford first meets Captain Harry Fanton in 1815, when she is newly arrived in England from Brussels. She and her mother, Elizabeth are on their way to spend time at Chadcombe House, with Juliana's dear friend Charlotte, who is newly married, but first, they must take rest in The King's Head, a coaching inn, near the port of Dover. Due to unexpected circumstances, the ladies are forced to share the Inn's facilities with Captain Fanton and his companion, which causes Juliana some consternation.

Juliana is shocked when Harry unexpectedly arrives at Chadcombe House and is even more surprised to discover that Harry is none other than Charlotte's brother-in-law. At first Juliana is impervious to Harry's considerable charm but as the story progresses and we are given more of an insight into Juliana's background, we start to see a distinct thawing of the relationship between Harry and Juliana. However, Harry is fighting his own particular demons and doesn't feel that he has anything to offer a prospective bride.

What then follows is a delightful "will they or won't they" Regency romance which is set against the background of the early nineteenth century as the country is preparing for a continuation of the war with Napoleon. And whilst there is a light and easy feel to the story, especially in Juliana's close relationship with her friend, Charlotte, there is also a darker edge which links to a secret in Juliana's past which threatens to spoil her future happiness.

The author writes well and certainly knows how to bring both place and people alive in the imagination. I soon found myself quite immersed in this lovely story and especially enjoyed how several story lines came together to give us a tantalising glimpse of Regency life and of the restrictions placed on women. Having said that, Juliana is a feisty heroine and I enjoyed reading of  her interaction with Harry and hoped that everything would work out well for them.

It's been a long time since I immersed myself in a Regency romance and I had quite forgotten how much I enjoy reading them. The Captain's Disgraced Lady is a really enjoyable example of the genre and I am sure will appeal to those readers who enjoy this type of historical romantic fiction.

I recently discovered that this is the second book in the Chadcombe marriage series, the first book being Waltzing with the Earl, which gives us Charlotte's story. However, I didn’t feel at a disadvantage for not having read the first book as The Captain's Disgraced Lady sits comfortably on its own merits as a lovely standalone story. 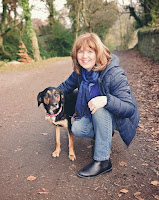 Catherine Tinley writes witty, heartwarming Regency love stories. She has loved reading and writing since childhood, and has a particular fondness for love, romance, and happy endings. After a career encompassing speech and language therapy, NHS management, maternity campaigning and being President of a charity, she now works for Sure Start. She lives in Ireland with her husband, children, and dog.

Do visit the others tops on the blog tour for more exciting content.