North Yorkshire, September 1939.
Rosina Cavert-Lazenby has summoned her five daughters back to Raven Hall, the crumbling ancestral home of the Lazenby family, of which Rosina is the sole living member. As war with Germany is declared Rosina's eldest daughter, Grace, informs her mother that she will be joining the home-front effort as a wireless-telegraphist based at a Y-station in Scarborough. Soon she is carrying out highly valuable transcription work. When the RAF come to stay at Raven Hall, Rosina finds herself intrigued by their charismatic, albeit young, officer. But is there time for love with the war looming? With so much on the line, Rosina and Grace must learn how to push themselves and have the courage to lead those around them into the unknown.
📖 My review...
Widow, Rosina Calvert-Lazenby has lived at Raven Hall for all of her life. It is where she has raised her five, feisty daughters to be independent and likeable young woman. However, in 1939, with the country of the cusp of war things are about to change for all those who call Raven Hall home.
Rosina faces  a very different sort of life, no longer lady of the manor with enough staff to run the estate she must now make do with her cook/ housekeeper and an elderly gardener so it is imperative that Rosina gets down to the essentials of keeping the estate functioning in a country badly affected by war.
Grace is the eldest of the Lazenby Lasses and is recently down from Oxford having achieved her degree but the need to do something to help the war effort encourages Grace to enrol in the WRNS where she becomes involved as  wireless-telegraphist based at a Y-station in Scarborough.
Moving effortlessly the wonderfully detailed chapters reveal the stories of both Rosina and Grace. We get to know both women really well, and with care and a fine eye for detail the strained atmosphere of living in England during wartime comes alive. Both women have their share of difficulties but each are resilient and so intimately brought to life that I felt as if I had come to know both of them as friends rather than simply characters in a book.
There is something quite special about this first book, for a start there is a fluidity to the story which had me turning the pages, with real involvement, both in the way the story was unfolding and in the realistic way each of the characters come so beautifully to life. I especially liked the detail of the work Grace was doing, the attention to detail is done so well that it never becomes too technical as it reveals the special challenges of this clandestine operation.
And then there's Harry...but I'll let you discover him for yourself 😊
A Mother's War is a perfect introduction to this wartime saga, beautifully written, with a real sense of history. I can think of no finer endorsement than to say I was really sorry when the book ended as I wanted to stay immersed in Rosina's and Grace's life. I am now eager to read more and hope that we won't be waiting too long before the next installment of this wartime saga is ready to be revealed.
📖 Best read with...Proper Jam sandwiches and a slug of good whisky..
About the Author
Mollie Walton is the pen-name for the historical novelist Rebecca Mascull. She has always been fascinated by history and worked in education, has a Masters in Writing and lives by the sea in the East of England. The inspiration for the Raven Hall trilogy came when she visited the stunning Raven Hall Hotel with her daughter and fell in love with the cliff-top view. Under Mollie Walton, Rebecca is also the author of the historical fiction trilogy, the Ironbridge Saga.
Twitter @rebeccamascull #AMothersWarBook
Facebook
Website
@welbeckpublish 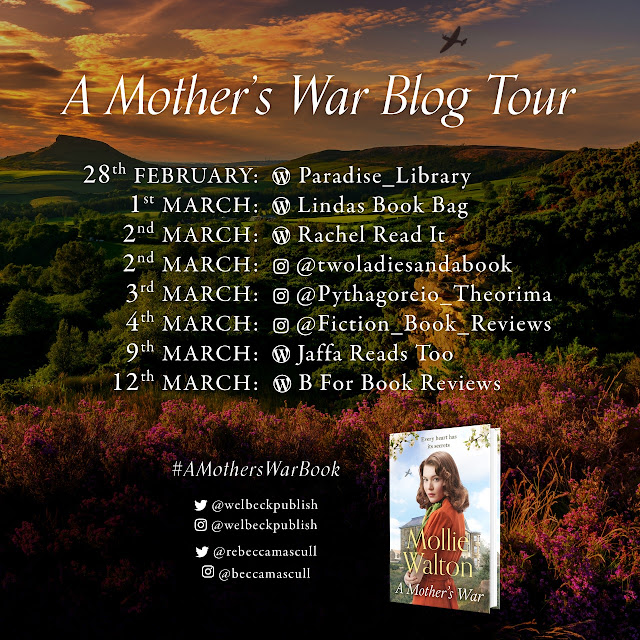