Emma is a high-profile MP. Impassioned and empathetic, she wants to make a positive difference but faces threats and trolling as she tries to work in the public eye. When she launches a campaign to protect women from the effects of online bullying, the abuse steps up. And when her teenage daughter’s character is called into question, Emma learns how far she will go to protect both their reputations. But still: how did she come to be standing trial for murder? She only lied once - didn’t she?

📖 My review...
Truly immersive from the very start Reputation introduces us to Emma Webster, a high profile labour back bencher who is determined that her role as an MP will make a difference, after all she promised her father, many years ago, that she would do whatever it took to make changes. However, Emma's tenacity about matters which affect mainly women attracts the unwanted attention of those internet trolls and keyboard warriors who delight in making abusive and horrible remarks. When the attacks start to get much more personal Emma's life starts to spiral out of control, and even more so when she is arrested on suspicion of murder.
The story is so scarily realistic that I had difficulty putting it down as so engrossed in what was happening to Emma, I forgot that that time was passing. The gradual build up to the crux of the story is compelling and I enjoyed how the story moved us forwards and backwards in time with Emma's trial being pivotal and absolutely unputdownable, so much so that when the verdict came in I was so apprehensive it took me a couple of seconds before I could look at what was written on the page.
I'm always interested in why women choose to go into high level politics in a time when their private lives are open to such scrutiny. Reputation shines a light on just how vulnerable  are  those women whose reputations, both professional, and personal, seem to be an easy target for anyone, be they journalists, or keyboard warriors, to go after with vitriolic intent.
There is something really special about an author who can, with just a well placed word, or sentence, take you into the complexity of another world and make it immersive and scarily believable. Sarah Vaughan is one such writer, as without doubt her psychological suspense stories are up there with the best, of the best, of the genre.
Sophisticated, thrilling, and utterly compelling, Reputation lives on in the imagination long after the last page is turned.
Best Read with...blueberry pancakes and an open mind.
About the Author 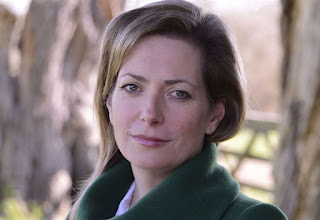 Brought up in Devon, Sarah Vaughan read English at Oxford and went on to become a journalist. After training at the Press Association, she spent eleven years at the Guardian as a news reporter, political correspondent and health correspondent, before leaving to freelance and write fiction. Anatomy of a Scandal, her third novel was an instant international bestseller and translated into 22 languages, long-listed for the Theakston Old Peculiar Crime Novel of the Year 2018 and short-listed for the Audible Sounds of Crime Award, GoodReads Jury’s Out award, French Elle’s Prix des Lectrices and Richard & Judy’s ‘Best of the Decade.’ Anatomy of a Scandal has been adapted for screen and will air on Netflix as a six-part series in Spring 2022. Little Disasters, her fourth novel, was selected as a Waterstones Thriller of the Month in 2021, has been sold to the US, France, Portugal, Sweden and Spain, and optioned for TV. Reputation is her fifth novel.
Twitter @SVaughanAuthor #Reputation
@SimonSchusterUK
@RandomTTours 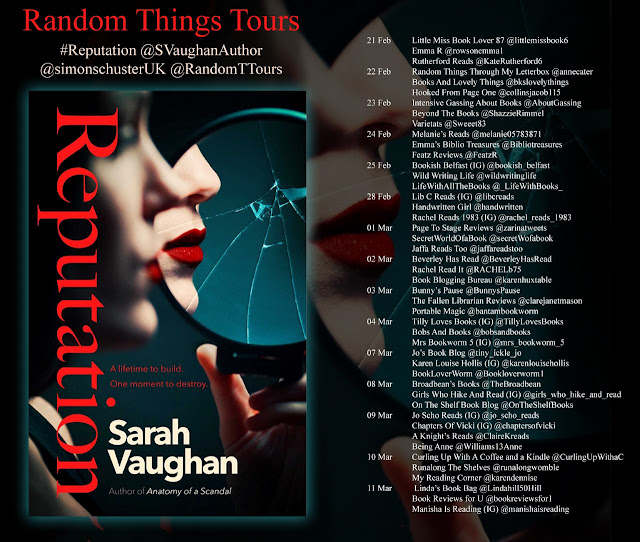