Teagan Ransom has finally settled in a place she can call home, spending time with new friends she adores, focusing on a fulfilling job, whilst reconciling the past and laying the groundwork for the future.

That is until Garrett Frost moves in next door. He’s obstinate and too bold, a raging and disruptive force of nature. Teagan recognizes the ghosts that haunt him, the torment driving him. Garrett would be risky in any form, but wounded, he’s far more dangerous. Tegan fears he could pull apart everything she has worked so hard to build, but Garret’s too determined…and too tempting.

Emotional and heartrending, Butterfly in Frost marks a brilliant return by global sensation Sylvia Day, the No.1 international multi-million bestselling author of the Crossfire saga.

There are too many things to register at once, so my mind attempts to absorb the whole man. Dressed only in black shorts and shoes, he is a visual feast of deeply tanned skin, intricate sleeves of tattooed art, and sweat-slicked, flexing musculature. And his face. Sculpted. Square-jawed. Brutally, breathlessly handsome. Roxy, now a few feet in front of me, gives a low whistle. “Hot damn.” The sound of her voice reminds me to breathe. My skin feels hot and damp with perspiration. My pulse has quickened beyond what I could blame on exertion. He doesn’t see us at first, even though he’s running in our direction. His mind is elsewhere, his body on autopilot. His long, strong legs devour the asphalt beneath his feet. His arms swing in a rhythmic, controlled tempo. It’s impressive how gracefully his body moves at such speed, aerodynamic and efficient. There’s both beauty and power in the effortlessness of his stride, and I. Can’t. Stop. Staring. I know I’m doing it and should look away, but I can’t.

“Are you seeing this?” Roxy asks, apparently unable to look away, either. Our trances are broken by frantic barking. Bella and Minnie have spotted the stranger running full tilt in our direction. “Hey,” Roxy corrects Bella, pulling her closer. “Knock it off.” But I’m still too absorbed to react in time. Minnie decides to run for it. Her leash slides out of my hand as if I didn’t have a grip on it at all. She’s gone before I can catch her, her stubby legs moving so fast that they’re a blur, on a collision course with him. “Damn it.” Now I’m running toward him, too, and he sees me. He shows no surprise when he’s pulled from his thoughts to find two gawking women and their out-of-control dogs. The hard line of his mouth tightens as he shifts from looking distracted to laser focused. And he doesn’t slow down. Primitive instinct spurs me to evade, escape. He’s like a raging cyclone hurtling toward me, and self-preservation demands retreat. “Minnie!” I shout, swiping a hand down toward the leash while running. I miss the target. “Damn it.” “Minnie Bear!” Roxy snaps, and the tiny dog instantly skids to a halt and pivots to run back to her human. I’m nearly as agile. I shift direction to dodge the man who’s charging at me, crossing to the other side of the street. “Teagan!”

Roxy’s panicked shout of my name turns my head . . . just in time to see the Chrysler 300 barreling straight for me. Adrenaline spurts, and I surge forward, the sound of squealing brakes raising the hairs on the back of my neck. I’m hit from behind with enough force to propel me off the road and onto my neighbor’s lawn. Winded and still terrified, it takes a few seconds to realize I’m okay. And that the hot, hard, sweaty hunk of a man I’d been running from is on top of me.

Sylvia Day is the No.1 New York Times, No.1 USA Today & No.1 international bestselling author of over twenty award-winning novels translated into 41 languages. With tens of millions of copies of her books in print, she is a No.1 bestseller in 28 countries. Sylvia served as the 22nd President of Romance Writers of America and presently serves on the Authors Guild’s Board of Directors. Sylvia’s work has been coveredin Time, Variety, People, The Wall Street Journal, Cosmopolitan, Associated Press, USA Today, and Entertainment Weekly. 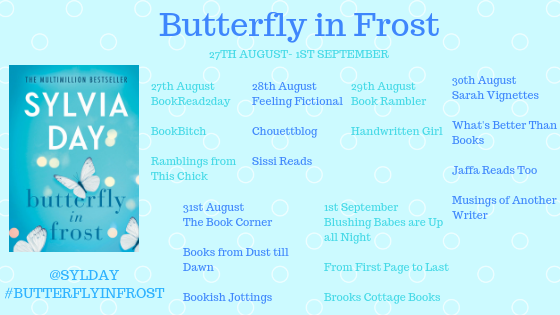