Charlotte, a wealth counsellor who knows from personal experience the complications that a sudden inheritance can bring, helps her clients navigate the emotional side effects of sudden wealth syndrome. When she is asked by Mateo Mendoza, heir to a huge Spanish estate, to fly to Madrid to help resolve an issue in his father's will, she's confident it will be straightforward. The timing isn't great as Charlotte's due to get married the following week, but once her client signs on the dotted line, Charlotte can return to her life in London and her wedding, and live happily ever after. Marrying Stephen might not fill her with excitement, but she doesn't want to live in the fast lane anymore - safe and predictable is good.

But Carlos Mendoza's final bequest opens up a generation of secrets, and Charlotte finds herself compelled to unravel the mystery. As Charlotte digs deeper, she uncovers the story of a family divided by Spain's Civil War, and of a love affair across the battle lines that ended in tragedy.

And while she is consumed in the drama of the Mendozas, Charlotte's own tragic past catches up with her, threatening to overturn everything in her life she's worked so hard to build

The story gets off to a dramatic start and sets the scene for something which happened in Spain in 1937. Moving forwards in time, to 2018, we meet with Charlotte Fairfax, whose role as a personal wealth counsellor sees her involved in an unusual situation in which a mysterious bequest from, the extremely wealthy, Carlos Mendoza is about to change an unknown beneficiary's life forever. Equally, this is not an easy time for Charlotte as she is about to get married and the last thing she needs, with her wedding just a week away, is to be involved in a complicated case.

The story flips between two time frames and we get to spend time in Spain during the momentous years of the Spanish Civil war, gradually getting to know the Mendoza family and learning of the volatile role they played within the local community. What gradually emerges is a story of long buried family secrets, and of a time when dangerous rivalries and tensions between families ran extremely high. Meanwhile, in the present Charlotte is involved in helping her client come to terms with what is happening, whilst at the same time trying to keep control of her own complicated personal life, which seems about to spiral out of control.

The author writes well with a real sense of history whilst at the same time keeping the interest of a modern day conundrum in which family secrets and hidden passions start to come to life. The Spanish Promise has a dramatic setting in Ronda in Andalusia, and the author does a great job of setting the scene and bringing all of the heat and passion of this part of Spain alive in the imagination. The dual aspect works really well with both time frames equally compelling so that neither one outshines the other.

The Spanish Promise is a great summer read and one which is perfect for lazy afternoon by the pool or a quiet afternoon in the garden. 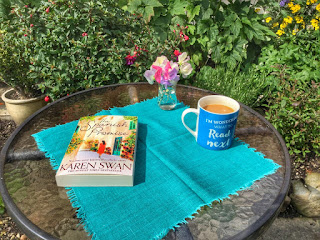 Karen swan is a Sunday Times best selling writer. She is the author of fifteen other novels, although she been a writer all her life. She previously worked as an editor in the fashion industry but she soon realised she was better suited as a novelist. She lives in West Sussex.