Four strangers are missing. Left at their last-known locations are birthday cards that read:

YOUR GIFT IS THE GAME

The police aren’t worried – it’s just a game. But the families are frantic, and psychologist and private detective Dr Augusta Bloom is persuaded to investigate. As she delves into the lives of the missing people, she finds something that binds them all.

And that something makes them very dangerous indeed.

As more disappearances are reported and new birthday cards uncovered, Dr Bloom races to unravel the mystery and find the puppeteer. But is she playing into their hands?

We've probably all tried at some point one of those enticing questionnaires on social media to find out what type of personality we are and never really attach much significance to the results but as this story points out the importance of collecting data from these, seemingly innocent quizzes, can be very relevant indeed.

In Gone people are going missing after receiving a mysterious birthday card which dares them to take part in a game. Leaving behind family, friends, work and all other personal commitments, these people are being recruited and quite simply leave everything behind, only to either resurface later ... or disappear completely.

Psychologist and private detective, Dr Augusta Bloom, gets drawn into this rather bizarre situation when a friend of her fellow investigator, Marcus Jameson's, goes missing leaving behind her young daughter. Further investigation ensues and Augusta and Marcus get drawn closer and closer into the centre of a totally perplexing mystery.

What then follows is a really thought-provoking psychological thriller which had me, on more than one occasion, on the edge of my seat. The characters are entirely plausible, some I liked more than others, for reasons which become apparent as the story progresses. I especially enjoyed getting to know more about Dr Bloom, who is quite a formidable figure, and her colleague, the enigmatic Marcus Jameson, with his MI6 background, is quite charming in his own special way. I could, quite easily, see this pairing becoming a forceful investigative duo should the author choose to continue this as a book series.

Gone is a commendable debut novel from an exciting new talent and I can't wait to see what she writes next ! 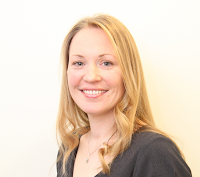 Leona draws inspiration for her writing from her own experiences having started her career as a psychologist with the West Yorkshire Police and her successful work in psychology since. She is now an occupational psychologist and lives with her family in Leeds. This is her debut thriller. 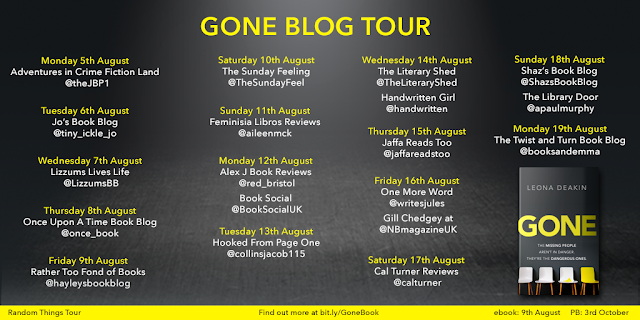