Paris, 1789. English spy Attica Morgan's success freeing kidnapped Britons has earned her acclaim with an underground network. But it has also led to attention of dangerously powerful men. So when she's given a new assignment in Paris, a city with revolution in the air, her instinct is to run.

Because in Paris, nothing is what it seems. Skirmishes in the city are rife and English visitors are viewed with suspicion. Attica is charged with investigating the murder of a rebel in the morgue of the Bastille, that notorious prison of no return. A murder her backers are convinced is part of a much more treacherous plot.

With France is on the cusp of a bloody revolution, Attica soon realizes her mission is a great deal deadlier than she bargained for. A mythic treasure has vanished, a strange man named Robespierre wants her dead, and on the city streets, all hell is about to break loose...


In this well written and exciting historical novel, we go back in time to eighteenth century Paris when the city was on the cusp of revolution. Emotions run high and anyone with any connection to the aristocracy is viewed with a growing sense of outrage and suspicion.

Attica Morgan is a female spy working for the English, and what makes her so unusual is her clandestine involvement in a male dominated secret society known only as the Sealed Knot. Attica's femininity really sets her apart, and yet, her strong and decisive personality, and her ability to get right into the action, makes her more than a match for any man, and takes her into some very dangerous territory.

From the notorious Bastille, to unwanted meetings with Maximilien Robespierre, there is plenty of intrigue and more than a little danger, as Attica and her associate race against time in order to  keep one step ahead of those who wish them harm. Attica is most certainly a woman to be reckoned with, she wields a knife with alarming accuracy, and her ability to mingle with the great, and the not so great of revolutionary Paris certainly shows her to be a courageous and intrepid heroine. There's also whole cast of supporting characters who add their own lively enthusiasm to what is, after all, a rollicking good historical adventure.

The Bastille Spy gets the series of to a really good start and I look forward to seeing just where the stories take us in the next Revolution Spy historical adventure. 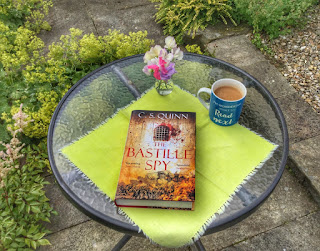 C.S. Quinn is a travel and lifestyle journalist for The Times, The Guardian and The Mirror, alongside many magazines. Prior to this, Quinn's background in historic research won prestigious postgraduate funding from the British Art Council. Quinn pooled these resources, combining historical research with first-hand experiences in far-flung places, to create her bestselling The Thief Taker' series.The Bastille Spy is the first in a new series featuring Attica Morgan.