Review ~ Smoke In Her Eyes by Anna Belfrage

Six months ago, Helle Madsen would have described herself as normal. Now she no longer knows if that terms applies, not after her entire life has been turned upside down by the reappearance of not one, but two, men from her very, very distant past.

Helle Madsen never believed in mumbo-jumbo stuff like reincarnation—until she came face to face with Jason Morris, a man who purportedly had spent fifty lives looking for her. Coping with being reunited with the lover from her ancient past was one thing. Having Sam Woolf, her vindictive nemesis from that same ancient past join the party was a bit too much. Suddenly, Helle finds herself the reluctant heroine of a far-flung, time-transcending epic story, one in which pain and loss seem to play a very big part.

This time round, Jason and Helle are determined to make it to the happily ever after. Unfortunately, Sam Woolf will stop at nothing to crush them. That ride into the golden sunset seems awfully far away at times…

Those who have read A Torch in his Heart, which is the first book in the darkly romantic Wanderer series, will be entirely familiar with the dangerous love triangle which exists around Sam Woolf,  Helle Masden and Jason Morris, so I'm not going to repeat what has gone before, however, for those who are new to the series, it would be much better if you started at the beginning and followed this daring story of thwarted love and heated passion.

Smoke in her Eyes continues in the same dramatic way as the first book, with so much unease that my heart was in my mouth and that was from just what was happening over the first chapter! The story continues with further developments in the twisted world which exists between these three complex characters whose shared history spans well over three thousand years.

The author keeps us well entertained with this dark story of love and revenge and, as always, the drama explodes in some truly fascinating encounters. However, it is in the relationship between Jason and Helle where much of the passionate heat of the story lies and in Smoke in her Eyes, they both have to overcome some pretty powerful emotions in order to understand just where their relationship is headed. There's jealousy, misunderstanding and suspicion between them, which makes their volatile partnership all the more exciting, and yet it is their erotic and passionate relationship in the bedroom which fairly sizzles on the pages.

The dangerous relationship which Jason and Helle have with their nemesis, Sam Woolf is where the story really gets into some dangerous territory, and as old jealousies explode so the battle for dominance continues with deadly vengeance. Contemplating the destiny of her characters is what this author does really well and she plots their fate with a deft hand and a fine eye for detail. I especially like the way she plays with the readers emotions so that you both love, and loathe, the characters in equal measure. The suspenseful mystery at the centre of the novel is as taut and tight as ever and there's never a moment when the action relaxes into complacency.

Smoke in Her Eyes is a worthy continuation of the Wanderer series and, after reading the tantalising excerpt at the back of this e-copy, I'm already looking forward to Fire in the Skies which is book number 3. 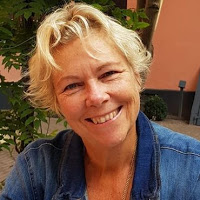 Had Anna been allowed to choose, she’d have become a time-traveller. As this was impossible, she became a financial professional with three absorbing interests: history, romance and writing. Anna has authored the acclaimed time travelling series The Graham Saga, set in 17th century Scotland and Maryland, as well as the equally acclaimed medieval series The King’s Greatest Enemy which is set in 14th century England.

Smoke In Her Eyes is the second book in her new series, The Wanderer. This time, she steps out of her normal historical context with fast-paced contemporary romantic suspense with paranormal and time-slip ingredients. She has loved writing the series – she hopes her readers will like reading it just as much.