The Runaway Daughter by Joanna Rees

It’s 1926 and Anna Darton is on the run from a terrible crime she was forced into committing. Alone and scared in London, salvation comes in the form of Nancy, a sassy American dancer at the notorious nightclub, the Zip. Re-inventing herself as Vita Casey, Anna becomes part of the line-up and is thrown into a hedonistic world of dancing, parties, flapper girls and fashion. When she meets the dashing Archie Fenwick, Vita buries her guilty conscience and she believes him when he says he will love her no matter what. But unbeknown to Vita, her secret past is fast catching up with her, and when the people closest to her start getting hurt, she is forced to confront her past or risk losing everything she holds dear.

Anna Darton is running away from something bad and is determined to start a new life, re-inventing herself as Vita Casey, and taking a job as a dancer in a London night club. This is quite a risky move and is so far removed from her normal life that Vita feels like a fish out of water. London in the 1920s is home of the latest fashions and the new risqué world of flappers and good time girls, and whilst her sheltered upbringing hasn't prepared Vita for this exciting new life she very quickly throws herself into the heart of the action with steely determination.

The story takes us right into the hedonistic world of the 1920s when those who had money could live a fine life filled with gaiety and pleasure and yet, beneath the facade of everyone having a good time, prejudices flourished and petty squabbles and jealousy could make or break those with fragile personalities.

It's been interesting to spend time with Vita, seeing London through her eyes and watching as she goes from wide eyed and frightened ingénue, to a strong and determined young woman. The journey she must take in order to get there is fraught with danger and filled with intrigue especially when her past threatens her fragile new future. The author writes well and has certainly captured time and place and gives us a real sense of an exciting time when women doing their utmost to become more independent and yet, as daughters, sisters, wives and mothers, they were still at the mercy of unscrupulous and dominant men.

The Runaway Daughter is the start of A Stitch in Time trilogy, and by the end of the novel, which I enjoyed immensely, and with the exciting finish, I'm already looking forward to seeing where the story takes us to next.

Joanna Rees is a bestselling writer of numerous novels such as The Tides of Change and A Twist of Fate. With over twenty years’ writing experience, Joanna regularly teaches creative writing in schools and libraries and she also contributes regularly to online station Radio Gorgeous. Based in Brighton, Joanna is married to the author Emlyn Rees, with whom she has three daughters. They have co-written several novels, including the Sunday Times number one bestseller Come Together, which was translated into over twenty languages and made into a film. 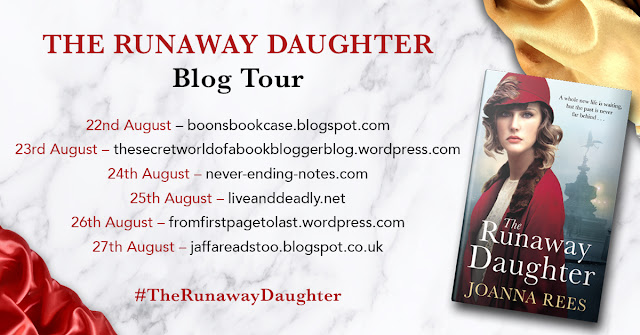