Hi Sam and a warm welcome to Jaffareadstoo. Tell us a little about yourself and how you got started as an author?

I often wonder if the beginnings of Call Billy were conceived when I was locked into the misery of my own family as a child, or when during the course of my therapy, I realised I no longer needed the skills I’d acquired as a child, to stay safe? Who knows – we don’t live in a vacuum. I’m not sure Call Billy would have been possible without what went before. But living within a loving family certainly opened my eyes to the world around me, and exploring what it means to be human, in all its complexity, in one way or another, seemed an obvious path. 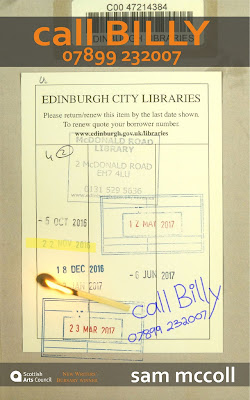 Your books are written in Scotland – how have the people and its landscape shaped your stories?

Very little. If I’d been living in England, or Wales or anywhere else, I’d have used the landscape to bring colour and setting to the plot, but my work is character driven – plot, setting and everything else is the lens through which my characters reveal themselves.

I don’t imagine so. My books are set in Scotland, one in Edinburgh, one in Oban, and my current one in India and Scotland. Marketing and promoting them here, is as good a place to start as anywhere else. I read books set anywhere in the world – if it’s a good book, it’ll fly …

I do visit all the places I write about including spending a week in Jodhpur in Rajasthan, India, for my work in progress, Adam. In as much as it makes it easier to picture my characters living in these places, walking, picnicking, quarrelling, hiding or whatever, yes, they are with me.

It’s a particular frame of mind, of commitment to perfecting the craft, a certain resilience, that makes an author. I couldn’t in all conscience recommend the North as more ideal than anywhere else. In fact when I lived in a city, without the temptations that a place of great beauty throw up, I found it easier to keep my head down. This morning for example, after a grey weekend, the sun blazed through the autumnal woodland and glittered on the sea. So instead of settling down to my list, I took the cat for a walk to the beach, photographed her climbing trees and posted them on social media… I love Scotland, I love living here, working here … but I might write better in a basement with no windows!

I don’t much. I meet authors at events, but authors are just people. My friends do all sorts of things – from IT to auctioneers. I do enjoy mulling over the artistic journey with friends, and some of those are writers, but the spark of conversation with like-minded people doesn’t depend on that.

Yes and no. I do have books for sale locally, but my local bookshop in Tarbert was not interested in stocking Call Billy, they said folk were not interested in literary fiction – despite have a book festival here in October. And although I have read in many libraries in Edinburgh, here in rural Argyll we have to rent library space – having said this, the local librarian was very encouraging and interested. My local book group have read it, and we discussed it – but I would say the opportunities in rural areas are very limited.

Do you currently have a work-in-progress and if so what can you tell us about it?

Yes, I’m writing a book called Adam. It is about two boys who meet in the 1980’s in a boarding school and form an unlikely friendship. Adam has a secret to keep, and Batuk, an Indian boy, sent half way around the world by his father, to stop him asking so many questions, has a secret to find. It’s a very different kind of work from Call Billy 07899232007 and Call Abi (phone number). The story is told by Batuk, in collaboration with Adam’s sister, Bonnie and mother. As an educated man, he reveals this complex and touching journey between him and his friend Adam, through a potpourri of poignant reflection, correspondence over ten years and Adam’s final journal in which he kept a vivid account of that last transformative year of his short life.

For years I have resisted posting my biography. I should be writing novels, I’d say, when my friends and family brought it up – and besides, no one needs to know about the author – it’s the characters in my work that are significant.

But pressure made me rethink and I’ve been surprised - I’ve found it satisfying and refreshing. So here I am, rummaging around in my murky past to find something to say about myself.

It’s my take on it, of course. My sister will see things very differently. But this is my understanding of it - and out of it, I have become who I am.

I'm the younger of two sisters. We were raised in a family hushed and stunted by the threat of violence. For many years I wished she'd stop challenging him – I thought we'd have peace if she did, for she and my father created a war zone which excluded my mother and I, as we watched uselessly from the side-lines. It took me many years to understand that the violence was his, not hers. She was a child looking for love, like we both were.

Our parents were killed in a car accident on their way back from a party one Saturday night and we were woken on Sunday morning by two policemen at the front door. We neither went to their funeral nor discussed them again, in fact we began a new school less than forty-eight hours after the crash. (‘Whatever you do, don’t mention the parents,’ were the words spoken to a whole school assembly before we arrived. The year was 1964 and things were very different then.) I also learnt while flicking through a local newspaper, some months later, that the occupants of the other car were fined a few thousand pounds for drunk driving.

We spent what remained of our childhood with our aunt's family and it didn't work out well.

Children do what they can to be happy, and I kept a low profile. Keeping my sister on an even keel was all-consuming. One false step or wrong word and she would certainly bring my world to a stop.

I both loved and feared my sister in equal measure, and I continued to both love and fear the people I grew close to, for many years. Eventually, with little sign of things calming down, I went into therapy and began to understand the vital part I played in the continuing soap opera that was my life. It wasnae me officer just didn't cut it. It was me, just as much as it was the people I chose (after all I was an adult wasn't I?) to surround myself with, and if I wanted a different life, it was me that had to change.

I gave up cigarettes, my sister and my husband, cold turkey. It was the most painful thing I've ever done, like losing the reason to live. I could never have done it without intense professional support.

Between us we built what in the trade is sometimes called a strong and nurturing inner-parent. Once that was done we asked her to draw up some strong boundaries for my so-called inner child. This took months. It's a bit like saying to a child, ‘I know you're thirsty, but coke will rot your teeth, how about a glass of spring water. You may even grow to like it and you definitely won't miss the toothache’. And I didn't. Don't.

Finding myself with nothing to fear created a huge scary space in my life and very slowly I began to fill it with healthy options. And eventually I began to write.

With little meaningful education, it took two decades to understand and learn the art of storytelling and the process has changed my life.

I have completed two novels and am working on a new one. In case any of you are wondering, I've not written my own story. I find that if I come close to characters I've known, I lose my unbiased observation as a writer. But I do know what it's like to be too afraid to breathe, to straddle a wire fence, unable to decide which side to fall onto - broken glass or upturned nails, full to the brim with the futile hope that I won't be hurt this time. I know what it's like to watch someone you love beg to be battered. And these experiences have helped me, sometimes, find a truth for my characters and set fire to my writing.

Over the years, I've supported vulnerable adults in a variety of ways within various charitable organisations.

I have three grown-up children, and live between Tarbert and Edinburgh with my husband.