What's it all about.

Their lives are ones of quiet contemplation—and brutal murder.

Christmas Eve, 1176. Brother Maurice, monk of Fairmore Abbey, awaits the night prayer bell. But there is only silence. Cursing his fellow brother Cuthbert’s idleness, he seeks him out—and in the darkness, finds him brutally murdered.

Summoned from London to the isolated monastery on the Yorkshire Moors, Aelred Barling, clerk to the King’s justices, and his messenger Hugo Stanton, set about investigating the horrific crime. They quickly discover that this is far from a quiet monastic house. Instead, it seethes with bitter feuds, rivalries and resentments. But no sooner do they arrive than the killer strikes again—and again.

When Barling discovers a pattern to these atrocities, it becomes apparent that the murderer’s rampage is far from over. With everyone, including the investigators, now fearing for their lives, can Barling and Stanton unmask the culprit before more blood is spilled?


I love wandering around the ruins of an ancient abbey. The glory of their days can still be seen and felt within the warmth of the stone and in the shadowy footprints of the holy men, and women, who once spent time in the chancels and cloisters, intent on prayer.

In The Monastery Murders, the clerk to the king’s justice, Aelred Barling, finds that, once again, he is embroiled in a difficult and dangerous case, and, on this mission, more than ever, he is grateful to have the support of, his stalwart messenger, Hugo Stanton.

On the orders of Ranulph de Glanville, the King’s great justice, Barling and Stanton are sent to Fairmore Abbey, an isolated Cistercian Abbey in Yorkshire, where they are to investigate a brutal murder which has left the inhabitants of the Abbey reeling both with shock, sadness and more than a hint of anger. The monks and lay men of the settlement are in turn both jittery and bewildered and turn to their Abbot, Philip de Franingeham, for fatherly support and guidance. However, all is not as it seems in this quiet Cistercian Abbey, and Barling and Stanton very soon, discover, to their cost, just how deep is the core of evil, which strikes at the very heart of the Abbey.

In the hands of this skilled storyteller, the medieval world of 1176, comes gloriously alive with all the sights, sounds and terrifying experiences of living in such a cloistered environment, especially when multiple deaths seem to be occurring. From matins, to compline, the ordered lives of the religious order is held up to scrutiny, and it soon becomes obvious that all is not as it seems in this house of God.

This is now the second Stanton and Barling mystery that I have read and I have been very bit as enthralled in this murder mystery as I was in the first of their adventures. The author creates such a sense of history that it is entirely possible to believe that you are walking alongside Stanton and Barling as they go, confidently, about their investigations.

This series has only just got started and I have every confidence in this author’s skilful ability to create more and more adventures for these two intrepid detectives. I can’t wait to see where they go in their next adventure. 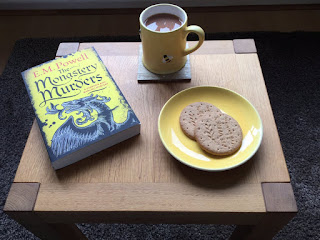 E.M. Powell’s historical thriller Fifth Knight novels have been #1 Amazon and Bild bestsellers. The King’s Justice is the first novel in her new Stanton and Barling medieval murder mystery series. She is a contributing editor to International Thriller Writers’ The Big Thrill magazine, blogs for English Historical Fiction Authors and is the social media manager for the Historical Novel Society.

Born and raised in the Republic of Ireland into the family of Michael Collins (the legendary revolutionary and founder of the Irish Free State), she now lives in North-West England with her husband, daughter and a Facebook-friendly dog.

During the Blog Tour we will be giving away 6 copies of The Monastery Murders by E.M. Powell! To enter, please enter via the Gleam form below.

– Giveaway ends at 11:59pm EST on December 7th. You must be 18 or older to enter.
– Giveaway is open INTERNATIONALLY.
– Only one entry per household.
– All giveaway entrants agree to be honest and not cheat the systems; any suspect of fraud is decided upon by blog/site owner and the sponsor, and entrants may be disqualified at our discretion.
– Winner has 48 hours to claim prize or new winner is chosen.

Jaffareadstoo is not responsible for choosing the winner or the distribution of the prizes. 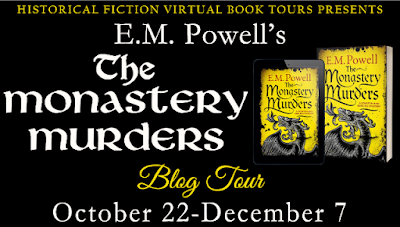