Cordelia Russell has been living on the French Riviera for twenty-five years, passing herself off as an English socialite. But her luck, and the kindness of strangers, have run out.

The arrival of a visitor from her distant past shocks Cordelia. She reacts violently to the intrusion and flees her flat to spend a drunken night at a glittering party. As dawn breaks she stumbles home through the back streets. Even before she opens her door she can hear the flies buzzing. She did not expect the corpse inside to start decomposing quite so quickly . . .

My thoughts about Skin Deep..

Right from the very start of this remarkable story there is never a moment when the narrative doesn't leave you reeling with surprise. The opening chapter was so compelling that I didn't want to stop turning the pages, I was so engrossed in the complicated life of Cordelia Russell that I didn't notice time passing. Cordelia is a woman, who it must be said, has very few, if any, redeeming qualities, and from her complicated childhood, on an isolated Irish island, which was devastated by a family tragedy, Cordelia seems to lurch from one complicated mess to another, but does so with a supercilious flair which you can't help but in a weird sort of way admire.

This author does complicated females with such panache and in Skin Deep has created the most abominable characters and yet, does so with such precision and genuine thought provoking badness that you can't help but become engrossed in the complicated world of Cordelia Russell and her associates.

Skin Deep really does get under your skin from the very beginning and I won't spoil things by explaining too much about the whys and wherefores as this is one of those deliciously dark suspense stories which is best read without any prior knowledge of where the story is heading. That the story is heading in a very dark direction becomes obvious as the story progresses, and I raced through the book at top speed as I didn't want to miss a single minute.

I devoured, yes, that's the right word, devoured, Skin Deep from its opening pages to its entirely appropriate conclusion. It's dark, dangerous and deliciously addictive and I loved it 😉

Before becoming a full-time writer, Liz Nugent worked in Irish film, theatre and television. In 2014 her first novel, Unravelling Oliver, was a Number One bestseller and won the Crime Fiction Prize in the 2014 Irish Book Awards. Her second novel, Lying in Wait, went straight to Number One in the Irish bestseller charts, remained there for nearly two months and won her a second IBA. She lives in Dublin with her husband. 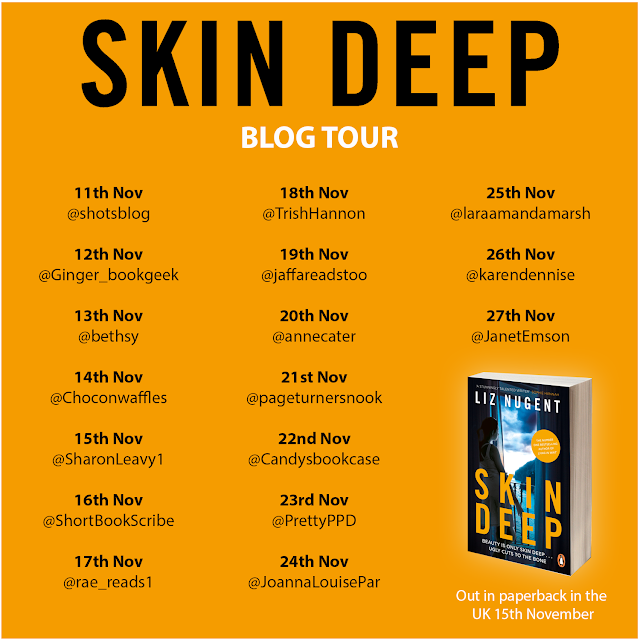