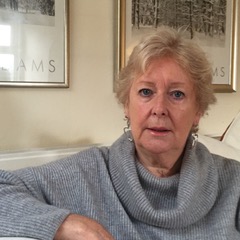 Hello Kay and welcome to Jaffareadstoo. Thank you for spending time with us today.

I was born and brought up in Yorkshire but won a scholarship to RADA when I was sixteen. I acted in Repertory and Television – among television roles were two appearances in the early Dr. Who. One as Nero’s wife in Dr. Who and the Romans – the other as Flower in Dr. Who and the Savages – both with William Hartnell as the Dr. However, I gradually became more interested in working with and developing writers and gave up acting. I joined BBC radio drama script department in London – eventually directing the scripts I worked on. After some years I devolved my job to Manchester – feeling that there was a sub text to northern writing that I understood. I couldn’t explain what it was – I still can’t. I eventually also began directing in theatre and television. Coronation Street was the programme I directed most regularly.

There’s something in the northern landscapes that really appeals to me. There’s a grittiness, a toughness as well as great beauty.

My novel The Trial of Marie Montrecourt is set in Harrogate, Leeds and Ilkley in the early 1900s. It’s loosely based on a Victorian crime I discovered some years ago while researching for a potential television drama series. That particular story was never used – but it stayed with me. The woman who perpetrated the crime I disliked but there were fascinating coincidences and an unusual end and I wanted to create my own world where the reader would understand why my character could have been driven to take the action she did. I also loved weaving a story that the reader wouldn’t want to put down. I moved it to Yorkshire because by now I was in the north and that middle-class society contrasted strongly with the London world inhabited by my other central character. It would seem that whatever sub text affected me when I was script editing must still be working.

Although writing can be a solitary business - luckily many of my friends are authors and most of them northern so we can have a good moan. For further support, I think organisations like Promoting Yorkshire Authors are excellent and important and helpful – otherwise you can feel you’re working in a vacuum. As I am not very good at promoting my own work they can make suggestions for outlets and point out events such as literary festivals and they aim to give a higher profile to the writing talent that is happening in the north. in the north too there are still some independent bookshops which are very encouraging to local authors. One can only hope they continue to survive.