Blog Tour ~ Within the Silence by Nicola Avery

Strangers are not all there is to fear. Danger can also come from someone close by, someone you’d never suspect…

Jon Stone is a revered psychiatrist, doting husband, loving father. But Jon has many secrets.

Maddy Stone, Jon’s daughter, has her own secrets. But she can’t tell anyone.

Zara, Maddy’s loving stepsister and best friend, faces a race against time. Can she unearth the family’s dark secrets before a tragic history repeats itself?

Two girls: one living and lost, the other scarred and silent, must join forces to prevent the unspeakable…

Within the Silence is a dark paranormal thriller which unpicks the ‘perfect family tapestry’, filled with mysterious twists, sinister discoveries, dangerous and terrifying intentions, heartbreaking confessions, and a love so powerful it crosses even death.


At the heart of Within the Silence is a dark secret and as the family celebrate her step-sister's engagement, Maddy Stone is making plans for her own future happiness. What then follows is compelling story about dark family secrets which have been kept hidden for far too long, and of the horrific consequences of those secrets when all is finally revealed.

This is one of those stories which may, at first, seem a little fanciful, with a ghostly element which perhaps needs you to suspend belief, but, this is fiction after all, so go with it, as it all starts to make perfect sense as the story progresses. I'm not really at liberty to say too much about the plot as it is one of those which can be very easily spoiled and that's not fair, as Within the Silence is a story which must be read without any indication, from me, of where the plot is leading.

The author writes with real flair and keeps the momentum of the story alive, so much so,  I continued to read long after I should have put the book down as I really wanted to see how the story played out. There are distinct clues, scattered like gemstones, along the way, and I enjoyed, once the story was finished, going back to re-read certain sections again to check if I had picked up on the right vibe. I had 😉

There are some lovely moments of light and shade, particularly around the relationships the family have with each other, however, running alongside, there are some truly evil moments which really give the story a dark and shadowy atmosphere.

Within the Silence is the first book I have read by this author, and I am delighted to learn that her debut novel, Whispered Memories, sounds every bit as good as this one...

Nicola Avery was born in Surrey England, moving to Australia in her early twenties. With an artist and writer as a father and a ballet dancer for a mother, Nicola was destined to go back to her creative roots. Returning to the U.K. as a single parent, she continued a career within the corporate world of finance, finding time to launch her own costume design business, until her daughter finished full time education. At this stage in her life, fascinated about the concept of a past existence, Nicola studied and qualified as a past life therapist/hypnotherapist using these skills to further research the purpose and meaning of life. She channels these experiences, and her experience on Majorcan waters, in her two thrillers: Whispered Memories and Within the Silence.

Nicola lives now in Surrey England, with her partner and two cats, she has one daughter and a granddaughter. She is currently working on a children’s book and another thriller. “If there’s a genre I can cross and mix, I will do it” – she says… 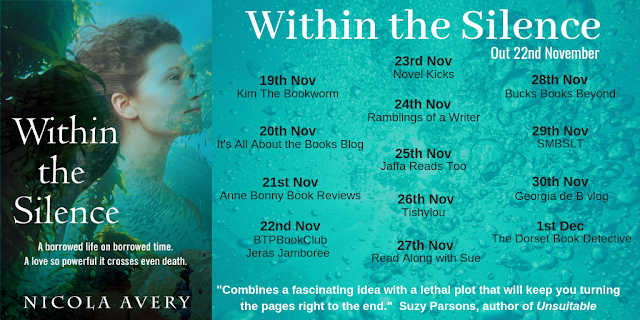