Blog Tour ~ None So Blind by Alis Hawkins


On Hist Fic Saturday I am delighted

to host today's stop on the None So Blind Blog Tour and to welcome the author, Alis Hawkins 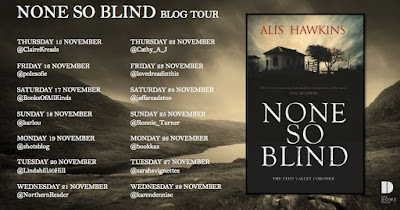 Hi Alis and a very warm welcome to Jaffreadstoo.

Many thanks for hosting me at Jaffareadstoo, Jo – it’s such a pleasure to be here as part of None So Blind’s blog tour.

I write historical crime fiction because I’m fascinated by the nitty gritty of how people lived in the past. (And I’m talking about the real past, here, not the past as defined by Crime Writers Association rules. The CWA believes that any novel set more than thirty years before its publication date counts as historical which I find more than slightly alarming. How is 1988 suddenly history? But I digress.)

When you write historical fiction set well before the bounds of living memory, you have to be very aware of the constraints on your characters’ attitudes as well as their actions. You can’t just dress modern humans up in period clothes and move them about in the past; the people in your fiction have to reflect the actual experiences, world-view and understanding of their time.

I find that I’m constantly trying to distinguish between aspects of humanity that might be considered hard-wired (pesonality and emotional responses) and aspects that are simply circumstantial (attitudes and beliefs). It’s harder than it might sound, especially as current research in psychology suggests that very little is hard wired, that we’re all the product of the effects of our environment and our world view on our particular genetic makeup.

But one thing that does seem clear is that certain types of person have always existed. Warriors, dreamers, carers, tyrants, healers, poets, priests, peacemakers, disturbers of the peace... These archetypes are fundamentally human, they simply present themselves in different forms as the centuries go by.

And I’d add another to that list, a type that’s of particular interest to the crime writer. The psychopath.

Though a certain type of crime fiction has tended to promote the misleading belief that psychopath = serial killer, I’m interested in fiction that presents a more nuanced view. Patricia Highsmith’s Tom [The Talented Mr] Ripley, for instance, is a much more fascinating (and realistic) example of psychopathy; a superficially charming and engaging young man who slides through life, his path lubricated by amorality, spontaneity and clever manipulation.

The Ripleys of the world are both more intriguing and more troubling than the fictional Broadmoor candidate because they actually exist all around us. If we believe current estimates, at least one in a hundred people is a psychopath which means that even the least well-connected amongst us probably knows at least one. And I’m far more interested in writing about characters we can all recognise than in creating the kind of serial killing anomaly with whom we are colossally unlikely ever to come into contact.

Evidently, many authors feel the same because crime fiction is full of ‘one percent’ psychpaths. Think about it - anybody who takes the time to plan a murder and carries it out in cold blood must be well on the way to full-blown psychopathy. Most of us would turn into a gibbering wreck if we’d so much as killed somebody by accident, or in the heat of the moment; we would, very swiftly, either give ourselves up or give ourselves away. Not so the cool-headed, pathologically dishonest psychopath who feels no remorse at removing inconvenient people from their path.

But why are such manipulative and unfeeling people so popular in fiction? Is it really just because our fictional detectives need a credible and elusive bad guy to investigate? Because we’re happy to see them brought to justice at the end of the book as we finally see what repellent characters they are under their easy charm?

Perhaps the real reason is more subtle and more disturbing. Because, if we’re honest, psychopaths flaunt personality traits that we may find just a little bit attractive. They demonstrate a hunger for spontaneity and excitement, have an ability to create and project an utterly convincing persona, show a capacity to act swiftly and decisively without being weighed down by thoughts of the emotional and moral consequences, and can lie fluently and persuasively in order to get what they want. But, of course, we only find these things engaging if we don’t have to live with them every day; in fiction, we can observe the psychopath at one remove, safe on the other side of the page.

I’m fairly sure that one of the characters in None So Blind would meet the psychiatric threshold for psychopathy. It wasn’t intentional on my part, that’s just the way they turned out. But, interestingly, I’m not sure that this character would have become so psychopathic if they hadn’t had the upbringing they did. Research seems to indicate that individuals are born with the potential for psychopathy but that environmental factors in childhood flick an epigenetic switch to bring the full syndrome online.

So, are psychopaths born or made?

I prefer to think they’re made; it makes for a much more interesting book (and a slightly less alarming world). But I’ll let you read None So Blind and decide for yourself.

When an old tree root is dug up, the remains of a young woman are found. Harry Probert-Lloyd, a young barrister forced home from London by encroaching blindness, has been dreading this discovery.

He knows exactly whose those bones they are.

Working with his clerk, John Davies, Harry is determined to expose the guilty, but the investigation turns up more questions than answers.

The search for the truth will prove costly. Will Harry and John be the ones to pay the highest price?

Here's what I thought about None So Blind


This well thought out historical crime story takes us back to Wales in the mid-nineteenth century and introduces us to Harry-Probert Jones who has returned to his Welsh childhood home after working as a London barrister. Harry's homecoming is complicated, for all sorts of reasons, but it is made worse when the remains of a young woman are found and Harry gets drawn into the investigation.

What then follows is a murder/mystery which threatens to shatter the small Welsh community, exposing secrets which have been buried for a long time and as Harry gets drawn deeper and deeper into the mystery he comes to rely heavily another local man, John Davies, for help as his clerk. The two men make a good partnership and it was fascinating to watch them peel back the layers of secrets, some of which go back to the time of the Rebecca Riots which were a series of protests led by local farmers against the use of toll roads in rural West Wales.

There’s a dark edginess to the story with lots of twists and turns and I thoroughly enjoyed trying to piece together the clues alongside Harry and John. Both men have their own secrets which are gradually revealed as the story progresses and it was fascinating to see how their personal stories would eventually play out within the wider scheme of the plot.

The author writes well and it's obvious that a great deal of research has been done which places everything nicely into historical context. I didn't know anything about the Rebecca Riots, so it was particularly interesting to discover more about why the farmers were so angry. I also found the brief Welsh glossary, at the start of the book, really useful.

None So Blind is the first book in the Teifi Valley Coroner series, so there was a certain amount of setting the scene and getting to know the central characters who, I’m sure, will feature strongly in future novels. The conclusion to the story lends itself nicely to a continuation of the series and I look forward to meeting up again with Harry Probert-Jones and John Davies in future stories. 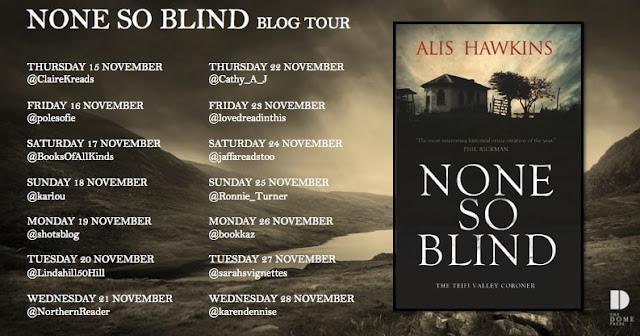