Zoe, a sometime artist, is from California. Martin, an engineer, is from Yorkshire. Both have ended up in picturesque Cluny, in central France. Both are struggling to come to terms with their recent past—for Zoe, the death of her husband; for Martin, a messy divorce. Looking to make a new start, each sets out alone to walk two thousand kilometres from Cluny to Santiago, in northwestern Spain, in the footsteps of pilgrims who have walked the Camino—the Way—for centuries.

The Camino changes you, it’s said. It’s a chance to find a new version of yourself. But can these two very different people find each other?

Over the past three weeks I have watched the BBC TV programme, Pilgrimage: The Road to Santiago and watched as seven very different people, who are normally in the public eye, set off to walk the Camino on the famous pilgrimage route to Santiago de Compostela. By coincidence, at the same time, I was also reading Two Steps Forward, about Zoe and Martin, two very different people who meet and connect whilst on their own very personal pilgrimages to Compostela.

Two Steps Forward evolves quite slowly, taking its time to introduce us to both of the main characters, we learn of their sadness and confusion in a world where they always seem to be slightly out of step. Their alternating viewpoints allow us a glimpse into their individual feelings, whilst at the same time keeping the continuity of the story alive in the imagination.

This husband and wife writing duo have used their own personal experience of walking the Camino to great effect and so evocative are the descriptions of the countryside, the hostels, and the other pilgrims’ en route, that I really felt as if I travelled the Camino vicariously with them all. Zoe and Martin's separate story strands, which make up the two steps of the novel, are done with a composure I found intriguing, and soon became totally immersed in watching how the burgeoning relationship between these two very different people would unfold within the wider context of the novel.

The story isn’t about faith or religion as it clearly shows that pilgrims make the journey to Santiago de Compostela for many different reasons. It’s more a story of enlightenment and redemption and as Zoe and Martin discover more about themselves on the journey, so the story becomes, for them, a gradual understanding of what’s really important.

This pilgrimage to Compostela is not undertaken lightly and Zoe and Martin do not find the journey easy, and nor should it be, as walking this centuries old pilgrim route is a real test of their fortitude and is filled with the shadowy ghosts of those who have walked the Camino before them. 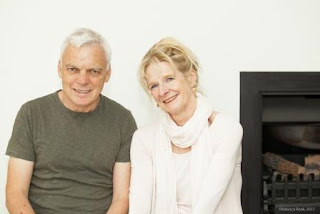 Graeme Simsion is the internationally bestselling author of The Rosie Project, The Rosie Effect and The Best of Adam Sharp.

Anne Buist is the chair of Women's Mental Heath at the University of Melbourne and the author of the Natalie King psychological thrillers.