Brittle but not yet broken, Ia Pendilly ekes out a fierce life in a caravan on the coast of Cornwall. In years of living with Bran - her embattled, battering cousin and common law husband - she's never yet had her own baby. So when she discovers the waif washed up on the shore, Ia takes the risk and rescues her. And the girl, in turn, will rescue something in Ia - bringing back a memory she's lost, giving her the strength to escape, and leading her on a journey downriver.


Ia Pengilly lives a solitary life on the Cornish coast, eking out a desolate existence, relying on her considerable wits and her innate ability to salvage the gifts the seas throw up. Her joyless relationship with her much older cousin, Bran, who uses and abuses her, and simply doesn't care enough to love her, is as bleak as her existence.

Set in some futuristic world where neither hope nor charity is allowed to flourish, gangs roam and pilfer, and when the light is on in Ia's isolated caravan, men, with their own specific needs, come a-calling.

There is a cold, cheerlessness to the story which I found utterly compelling and the barren nature of Ia's life is offset against the poetic quality of the words which rumble and turn at every opportunity. I loved the unique way that the prose skittered and danced, and was so in tune with the nature of its surroundings that it became totally immersive. I knew I was impressed when I read the opening paragraph three times, and so mesmerising is the narrative that even further into the novel I had to keep turning back to re-read a word, or a cleverly constructed sentence.

All Rivers Run Free is a story about self-discovery and self-worth, and of how lives are shaped and moulded by those we love, who are carried close to our hearts. It's also about a ferocious need to survive in a world where the dark shades of grief and loss are allowed to colour everything.

Natasha Carthew has been published previously as a poet and young adult writer and her books have been nominated for the Carnegie Award and shortlisted for several national awards including the Branford Boase. She lives in Cornwall with her girlfriend of twenty years and spends most of her time writing outdoors in all weathers. Her identity as a country writer has led her to become a survival expert, a trained walking-guide and to teach Wild Writing workshops. 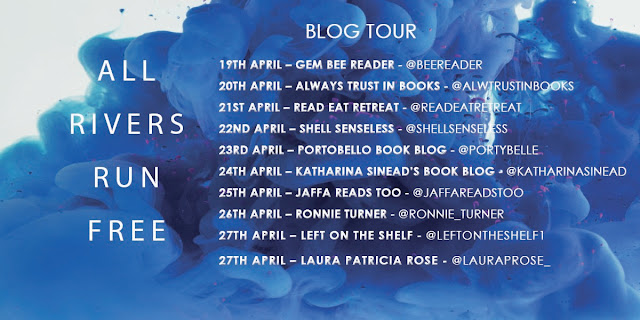