Blog Tour ~ Half A World Away by Sue Haasler..

Charming and talented Alex dreams of becoming a professional saxophonist while working long hours in the family bakery.

Detlef, lonely, repressed and a small-time Stasi informer, develops an obsessive love for him. But Alex has eyes only for Nicky, an English woman visiting East Berlin as an au pair. With no natural outlet for his feelings, Detlef’s passion becomes destructive, his need for approval enmeshed with the latent homophobia of the regime.

As Alex takes up with more successful musicians, he moves closer to influencers considered subversive by a state that has eyes and ears anywhere, and Detlef’s passions threaten to endanger them all.

Half A World Away is a classic love story set against the backdrop of East meets West. Set in 1987, in East Berlin, when Nicky, from London, travels there to work as a nanny for an Englishman and his child. There she meets and quickly falls into a relationship with Alex, a talented musician who works in the family bakery by day, and plays jazz by night.

That this love affair is difficult from the beginning is down to, not just the circumstances the young couple find themselves in, but is also due to the machinations of someone whose desire for Alex takes us into some very dark places.

East Berlin in the years before the wall came down was a very different place. All influences from the west have been eradicated and whilst people are expected to conform to the regime there are those who bravely fight against the system, often to their cost. I am old enough to remember the days before the Berlin wall came down and I think that the author has captured perfectly that shadowy quality of East Berlin when no-one outside of the country really knew what was going on there, or of how people lived their lives. For Nicky, a girl, from the West to visit the East was difficult enough, but then to form a relationship with someone there was fraught with difficulty from the very beginning.

The quality of the writing is such that the story really came alive for me. I was fascinated by the way people were encouraged to spy on each other and that what little luxuries they had could be taken away in an instant. And although the 'West' with its Macdonalds and shopping malls was just a short train journey, it really was half a world away, and couldn't have been more different.

This could very easily have developed into very heavy story but with a lightness of touch the author brings everything alive in a very readable way and I enjoyed seeing East Berlin through Nicky's eyes whilst at the same time allowed myself to follow in Alex's footsteps into a very different world.

Beautifully written, and in perfect step with time and place, Half A World Away is one of those stories which stays with you long after the last page is turned.

Sue Haasler is the author of four romantic fiction titles. She has been commissioned by the BBC to write an authorised tie-in to Holby City. Originally from Durham, she is married with an adult daughter, and lives in London. 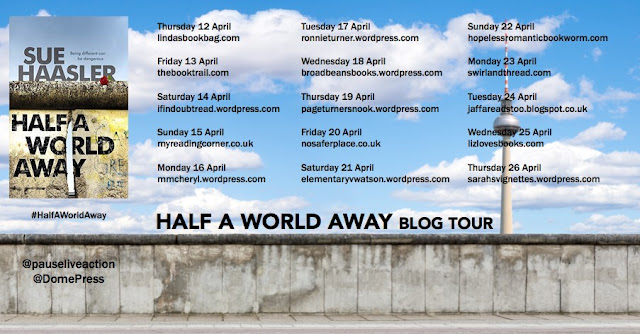