His Fic Saturday ~ The Cold Light of Dawn by Anna Belfrage

The Cold Light of Dawn is now the fourth, and possibly the last, book in this epic historical saga which brings the medieval world of Edward III so vividly to life.

In this latest adventure we meet up again with Adam and Kit de Guirande as they flit between their countryside manor house, at Tresaints, and the Royal court. As in previous novels, their life is just as eventful and, as they immerse themselves in the scheming and political manoeuvrings of the Edwardian court, so they find that, as always, danger is never very far away.

With Edward II believed dead, the English court is very much at the centre of controversy, and even as the new young King, Edward III, starts to flex his political muscles, there are still courtiers who gravitate towards Queen Isabella and her lover, Roger Mortimer. With his allegiance to his young king stretched to breaking point, Adam de Guirande, once again finds that his loyalty towards his mentor, Mortimer, will be tested to the absolute limit of even his, considerable, endurance.

It goes without saying that I am greatly enamoured of Adam de Guirande, who is fast becoming one of my favourite literary heroes. I love his ability to be at the heart of the action, whilst at the same time keeping his integrity intact. Adam and Kit's ardent love for each other shines like a beacon throughout, and the moments spent with them in the quiet of their bed chamber adds a really delicious blend of passion and spice to the story.

'Real life' historical personalities truly come to life in the hands of this skilful writer and by the end of this novel I really felt as though I had walked in the shadow of Roger Mortimer and, whilst not always in tune with his actions, by the end of the story, I had come to respect his ability as a political operator, and will, most certainly, miss his commanding presence. That there was also another sad departure of a character I had grown to love took me completely by surprise and, it must be said, that I shed a little tear and mourned his loss rather more than Mortimer's.

There is something rather wonderful about this exciting historical series which, with every successive story, grows in depth and complexity, and which offers a fascinating glimpse into life at one of the most controversial royal courts. The historical aspect is beautifully researched and, whilst the author takes one or two liberties, there is always a real sense of authenticity which captures perfectly the sights, sounds and sensations of a busy medieval world.

Steeped in history and alive with all the brilliance of a medieval court at the height of its power, The Cold Light of Dawn commands your attention. The story glitters and swirls around those vibrant personalities who made their mark on history and whose exciting stories deserve to be retold.

That the author feels this could be the end of The King's Greatest Enemy series is something I feel I must challenge, as to be without Adam de Guirande in future stories is not something I wish to contemplate. 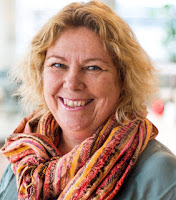 Had Anna been allowed to choose, she’d have become a professional time-traveller. As such a profession does not exists, she settled for second best and became a financial professional with two absorbing interests, namely history and writing.

When Anna is not stuck in the 14th century, chances are she’ll be visiting in the 17th century, more specifically with Alex and Matthew Graham, the protagonists of the acclaimed The Graham Saga.