Review ~ In the Blink of an Eye by Ali Bacon


In 1843, Edinburgh artist, David Octavius Hill, is commissioned to paint the portraits of 400 ministers who have broken away from the Church of Scotland. Only when he meets Robert Adamson, an early master of the new and fickle art of photography, does this daunting task begin to look feasible.

Hill is soon bewitched by the art of light and shade. He and Adamson become the darlings of Edinburgh society, immortalising people and places with their subtle and artistic images. In the Blink of an Eye is a re-imagining of Hill's life in the words of those who were beguiled by his artistry and charismatic charm.

These days we take photography for granted. At the press of a button we can record a digital image which is clear and bright and which keeps, forever frozen, a snippet of time. In the early days of photography, when capturing images was rather more unpredictable, the action of producing a calotype image was fraught with difficulty, and it is it is thanks to the perseverance of the early pioneers that the complicated medium of photography developed into the art skill it is today.

In Victorian Scotland, two pioneers of early photography come together, and it is this chance meeting between landscape artist, David Octavius Hill and photographer, Robert Adamson, which forms the background to this fascinating novel about the development of photography, not just as an art form, but also as a way of highlighting social change.

Charged, in 1843, with the mammoth task of visually recording over 400 ministers to commemorate the auspicious beginning of the Free Kirk in Scotland, Hill was persuaded to employ the services of Adamson, in order to individually photograph each of the ministers, so that Hill could then reproduce them, en masse, in a huge painting. (The 5' painting was eventally finished in 1866)

From the start of In the Blink of an Eye I was immersed in the story of how these two pioneers of photography came together and of their shared enthusiasm for recording images using light and paper. The author writes well and knowledgeably about the subject, and it's obvious that a great deal of research has gone into bringing this story alive. There is an authenticity in the way the story is allowed to unfold, and which gradually builds to form a fascinating snapshot of Edinburgh in the mid-1840s. I loved the little snippets of Scottish dialect which are thrown like gems into the story and which give the book a homely feel and stop it from becoming too serious.

I love novels which inform as well as entertain, and I have been both informed and entertained by In the Blink of an Eye which, not only, gave me an insight into the history and development of photography in Scotland, but which also told a lovely story of those people who flitted into, and out of, the lives of these two stalwart pioneers.

That Hill and Adamson's creativity, imagination and enthusiasm come alive again is testament to the strength of this author’s fine writing and of her having the foresight and passion to write about them in such a fascinating and thought-provoking way.

I was especially interested to learn that the young lady, photographed on the front cover of In the Blink of an Eye is none other than, Charlotte Hill, the daughter of David Octavius Hill. 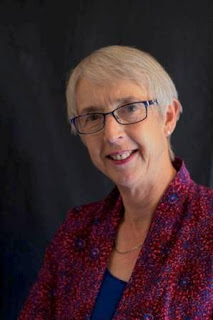 Ali Bacon was born in Fife and graduated from St Andrews University. After a career as an academic librarian, her first novel, Kettle of Fish, was published in 2012 by Thornberry.