Blog Tour ~ In Love and War by Liz Trenow

In Love and War Blog Tour

I am delighted to have the author, Liz Trenow, as my guest on the blog today. 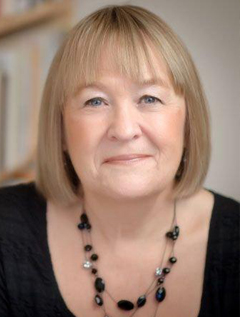 Welcome to Jaffareadstoo, Liz, tell us a little about yourself and how you started writing?

I spent most of my working life as a journalist (starting on local newspapers then moving to the BBC) and had tinkered with writing fiction but with a demanding job and a husband and two daughters at home never found time to write a novel. In my late fifties I managed to get early retirement and decided that it was now of never! I was incredibly fortunate to find an agent, and then a publisher – something I’d never even dreamed of.

What can you tell us about In Love and War without giving too much away?

The bodies of one in four who died in the First World War were never found – all their families were told was that they were ‘missing, presumed dead’. My husband’s uncle is one of these, and his name is inscribed with the many thousands of others on the Menin Gate at Ypres.

When I was researching an earlier book, The Poppy Factory, I discovered that almost immediately after the end of the war several thousands of people made the difficult journey to the devastated battlefield areas of Flanders and the Somme, desperate for news of their lost loved ones.

It must have been horrifying to witness the chaos that war had left behind: the mud, the trenches, the make-shift cemeteries, and I wanted to try to imagine how these early battlefield ‘pilgrims’ might feel, through my three characters: a young English widow, an American woman whose brother was lost, and a German mother whose son died.

In researching the story, did you discover anything which surprised you?

So many things! I’d intended to set the story in Ypres but when we visited there on a battlefield tour we discovered that the place had been completely rebuilt after being almost levelled to the ground by the war: hardly a building had been left standing and in 1919 there were no hotels or facilities for tourists there.

Then we visited a little village called Poperinghe, which had never been captured, and it was there we went to Talbot House, the ‘home from home’ for soldiers of all ranks created by a charismatic army chaplain called Tubby Clayton. He and the house play an important part in my story.

When I start I usually have quite a clear idea of what they are like and what will happen to them during the course of the novel. But characters do evolve as you write them, sometimes in interesting ways. I can get quite attached to them, and they do go on living in my head long after I’ve finished the book.

Yes I do get emotionally involved in my characters although I wouldn’t say it ‘takes its toll’ to any great extent. All I know is that if I feel genuine sadness, or joy, for them, they have come alive in my mind and will hopefully do the same for my readers.

Where do your ideas for stories come from, and as one book finishes do you already know where the next book will take you?

Ideas come from lots of sources – many of my books have been inspired by my family’s 300 year history of silk weaving (they’re still weaving today in Sudbury, Suffolk). Others come from something I have read, perhaps doing research for a previous book, as was the case for In Love and War. I usually know what book I am going to write next – the one I’m currently working on was inspired by a rather minor character from a previous novel, The Silk Weaver.

July, 1919. The First World War is over. The war-torn area of Flanders near Ypres is no longer home to trenches or troops, but groups of tourists. Controversial battlefield tourism now drives bus-loads of people to witness first-hand where loved ones fell and died.

At the Hotel de la Paix in the small village of Poperinghe, three women have come to the battlefields to find a trace of men they have loved and lost. Ruby is just 21, a shy Englishwoman looking for the grave of her husband. Alice is only a little older but brimming with confidence; she has travelled all the way from America, convinced her brother is in fact still alive and still in France. Then there’s Martha and her son Otto, who are not all they seem to be…

The three women may have very different backgrounds, but they are united in their search for reconciliation: to reconcile themselves to what the war took from them, but also to what life might still promise for the future,

Liz Trenow is a former journalist who spent fifteen years on regional and national newspapers, and on BBC radio and television news, before turning her hand to fiction. In Love and War is her fifth novel. The Forgotten Seamstress reached the top twenty in the New York Times best seller list and The Last Telegram nominated for a national award. Her books have been translated into a number of languages.

She lives in Colchester in Essex with her artist husband, and they have two grown up daughters and two grandchildren.

My thanks to Liz for answering my questions so thoughtfully and for her invitation to be part of the blog tour. 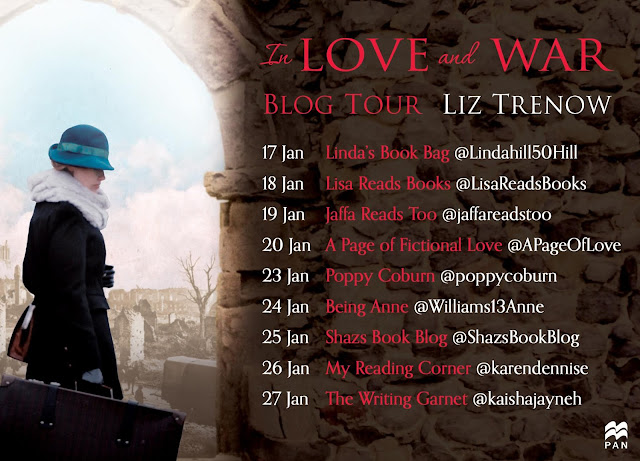