Review ~ A Line of Blood by Ben McPherson


This disturbing story starts with an event that will have repercussions throughout the whole of the novel. When Alex Mercer finds his next door neighbour dead in the bath, at first his only thought is that his young son Max is with him, and that he has seen something that no seven year old should ever see.

What then follows is a intricately plotted and very suspenseful novel which has a dark and very disturbing edge to it. On the surface, Alex and his American wife, Millicent seem to be unconventional but caring parents , they have a chaotic and unsettling life and Max, very much centre of their attention, is chillingly mature beyond his years.

The murder mystery at the heart of the story, that of the neighbour in the bath, is handled well and there are moments when the story twists and turns in on itself, so that you are never really sure of what is happening. All the characters in the novel appear fatally flawed, and the idea of having so many unstable narrators is quite beguiling, as throughout the novel you never really know who is actually telling the truth.

I read the book quickly over the space of a couple of afternoons and overall, I found it to be an engrossing and entirely convincing murder mystery, the twist in the tale was handled really well and had me guessing right to the very end. 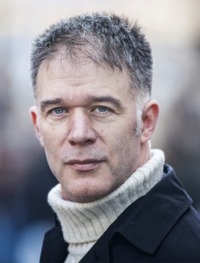 Ben McPherson was born in Glasgow and grew up in Edinburgh, but left Scotland when he was eighteen. He studied languages at Cambridge, then worked for many years in film and television in London. In 1998, after working a forty-eight-hour shift, he went for a drink at the Coach and Horses in Soho and met the woman he would go on to marry. Similarities to the characters in A Line of Blood end there.
Ben now lives in Oslo with his wife and their two sons. He is a columnist for Aftenposten, Norway's leading quality daily newspaper.