Sixteen superstars the world thinks are dead. One killer, determined to finish the job.

It's an intriguing idea, the story of a hideaway island where the great and good can disappear when their 'real' lives get too much for them. Faking their deaths and living on Dead Star Island, a remote tropical paradise, has worked for decades, and it would appear that John and Elvis, Marilyn and Diana, and a whole host of long cherished celebrities, find some sort of peace in obscurity. But all is not as idyllic as it first appears, and when a ruthless killer appears to be picking them off and murdering them one by one in a bizarre reconstruction of their original staged deaths, trouble flourishes in paradise. Enticed into investigating this bizarre crime scene, Mario Gunzabo, a one armed alcoholic with an unusual modus operandi, finds that the hidden secrets of the island and the narcissistic qualities of its celebrity guests, makes for a rather unusual crime investigation.

When I first read the précis for Dead Star Island, I was rather taken with the idea that world weary celebrities could choose to fake their deaths in order to escape a life which had become media intolerable. The idea that Marilyn and Diana were sitting close together on an island paradise was a strangely comforting thought. Less comforting, however, was the idea that these darling celebrities were being picked off one by one, like sitting ducks.

I was very soon absorbed into the whole concept of Dead Star Island, so believable is the idea that I really wanted this nirvana to actually exist. However, the important thing to remember is that this is beautifully written fiction; it’s well plotted, with a real sense of style and more than a hint of the downright bizarre, but when all is added together, the story really works, and works very well.. The mystery at the heart of the novel is intriguing, and whilst it is all very entertaining with Gunzabo at the head of the investigation, what mustn't be forgotten,  is that this is also a rather dark, twisted and highly energetic murder mystery.

This original and quirky debut novel is a real hidden gem and, I'm sure, heralds the start of an interesting writing career for its talented author. 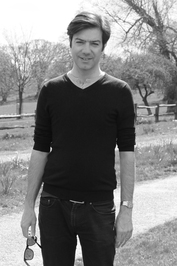