Halloween Review ~ The House on Cold Hill by Peter James..


From the very beginning of The House on Cold Hill there is a feeling of unease and the opening chapter reiterates that this is not going to be an cosy read and that it's probably one that's going to be best devoured with all the lights full on.

Ollie and Caro Harcourt and their daughter Jade move into the dilapidated house in a peaceful Sussex village. Ollie's excited by this move, and even though the house is dilapidated and falling down around his ears, he instinctively knows that he has found home. Caro and Jade, on the other hand, need more convincing that this is the right place for them. You see, Jade misses her friends and even though face-timing them sort of works, it doesn't make her feel altogether comfortable when her friends keep spotting a mysterious figure in the background on Jade's iPhone screen. When other more inexplicable things start to happen, the move to the house in Cold Hill village doesn’t look such a good idea any more.

Gradually, the true horror of what is happening in the house starts to take over the narrative, and it's done in such a subtle, almost matter of fact way, that even as the coldness of the creeping menace starts to pervade your bones, you realise that almost without thinking you are caught looking over your shoulder to find yourself peering into the shadows. The ghostly nature of the house, and believe me, the house is by far the most important character in this story, starts to dominate and there is an overwhelming need to read on and on and on….

There is no doubt that the author is a supreme master of his craft. There is an understated intelligence to the story, a succinct way of drawing out the suspense and a cranking up of the tension until at times it’s almost impossible to read without feeling that fearful jumpiness which comes from being scared witless. All too often creepy stories can rely on shock tactics to make the reader believe they are frightened, The House on Cold Hill is far more refined, the sharpness of the writing, which neither patronises nor over sensationalises what is happening, guarantees that the horror feels authentic and accurate.

I was constantly surprised by the story, I’d just thought I had the substance of it when it would twist and take me down a completely different path, until by the end, with a conclusion which is definitely worth waiting for, I was completely terrified. 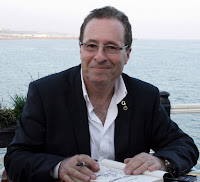 The House on Cold Hill.


My thanks to the author for sharing his work with me and to Julia At Midas PR and Pan Macmillan for my review copy of The House on Cold Hill.