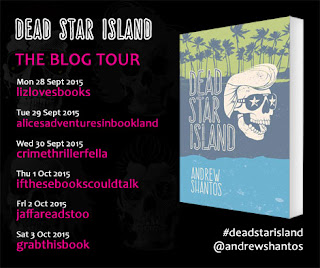 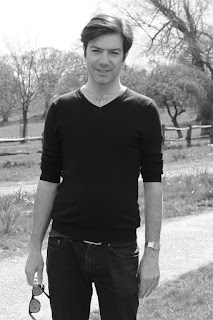 Andrew ~ welcome to Jaffareadstoo....tell us why you love your publisher .....

Why I love my publisher....

I interview a lot of people in my day job (by night I write fiction, by day I write code and look after a team of computer programmers). I really enjoy interviewing; not only am I allowed to be incredibly nosy, but people actually expect it. They earnestly answer questions I can’t even ask a close friend. How much do you earn? Why did you leave that job? Why are you here? What do you love? What do you wish you were better at?

But in their eagerness to give me persuasive (and hopefully honest) answers to those questions, there’s one thing that interviewees often forget. If they’re good, then the interview is as much about me selling the job to them as it is about them convincing me to give them it. Of course, you don’t want arrogance. You don’t want someone so conscious of their greatness it’s an honour to even have them turn up on time.

Ideally you have a perfectly even balance of power. This results in a nice chat, followed by a shake of hands, and either “We’re not quite right for each other,” or “When would you like to start”.

As a writer, I found myself on the other side of the desk. And in the world of writing, the power is most definitely in the hands of the publisher. (At least, it is from the perspective of the author; in the grander scheme of things, the publisher is little more than a few acres in the gargantuan rainforest that is Amazon.)

So my task, as a writer, and particularly as a debut novelist, was to somehow shift the balance, move it towards me. There’s a simple way to do this. Write an amazing story. Simple, but far from easy. And highly subjective, of course. But my plan was that if I managed to pull off this feat, then maybe, just maybe, I’d have a nice chat with a publisher (or agent), and if we both thought we could do business, we’d shake hands, sign a piece of paper and say “When do we start?”

This was my rather naïve take on it all, anyhow, after I’d finished my second round of submissions to literary agents, received polite refusals, and wondered what on earth I should do next. I went back to work, rewrote my book, improved it in as many ways and to as high a standard as I could, sought feedback and criticism from as many sources as possible. I remember picking up the Writers & Artists Yearbook (the Yellow Pages in the UK for finding a literary agent), standing in my kitchen, about to circle a few more names, when I made a decision: No. I don’t want this. I don’t want to be in limbo for month after month, waiting for someone to reply, who may not even read a single word of it. And even if they say yes, do I want to wait months more until it’s sold to a publisher, then go through layers of bureaucracy and half a dozen departments for a year or two until it’s finally launched, when I could just do it myself in a week, then move on and write something else?

A few days later I went for lunch with an old friend of mine. We were at school together, and we see each other once or twice a year. He asked me what I’d been up to. After some obligatory mumbling about the wife and kids, I hesitated.
“What is it?” he asked.
I told him I’d written a book. I rarely told anyone, always found it rather embarrassing. But, well, it was what I’d been up to, for several years at this point.
“Oh,” he said, “my wife’s parents’ best friends are publishers. I’ll get you their email address.”

However well an interview goes, however good a candidate seems, when you hire someone you’re taking a punt on them. You’re gambling that an hour or two of being in their company, being nosy about their hopes and motivations, is enough to decide on their suitability as a colleague for years to come. That hour or two isn’t enough. That’s why it’s a gamble.

How do you increase the odds? Well it’s great, when we’re advertising for a role, if someone else in the company says, “There’s this friend of mine… She’d be perfect.” When someone comes recommended, when they aren’t a complete stranger, it makes them much less of a punt. They’ll at least get an interview.

It seems the same is true in publishing. Literary agents and smaller publishers who receive hundreds of manuscripts each week surely have a brutal set of rules for sorting through the slush pile, while still serving their existing clients. Just as I have to be brutally efficient when I receive dozens of CVs for a role we’re advertising, while still getting through my normal workload. So if an agent or a publisher receives a manuscript from one of their clients, via a trusted friend, or through a fellow professional in the industry, well, at the very least they’ll read the submission properly.

So that’s how I found my publisher. Through a friend. It didn’t get me published; I had to write something good enough for that to happen.

But I sent them my manuscript, we met up, had a nice chat, decided we could be right for each other, and they offered me a deal. I thought long and hard. It was a big commitment. There was always the option of self publishing. I questioned them carefully about what they could do for me that I couldn’t do myself (plenty, they assured me. They were right; they put large amounts of time, money and effort into editing and proof reading the manuscript; they hired a publicist, got me great reviews in national newspapers, in magazines and numerous well respected blogs). But I didn’t know this at the time. I knew I would be taking as much of a gamble as they were. But one thing above all persuaded me: I didn’t want to go into business on my own. Writing is a solitary enough endeavour, without publishing and promoting a book without anyone on your side. Eventually, after a few weeks of wrangling over terms, we both signed a piece of paper and agreed to launch the book five months later.

So really, you’d have to say that we found each other, me and my publisher. As for why I love them, well, I had to love my publisher in order to do business with them. Just as they had to love me.

Andrew, thanks so much for sharing your thoughts and for giving us such a wonderful insight into the world of book publishing...

What's the book about?

WHAT IF Elvis, Marilyn and Jimi hadn’t died?

What if they had faked their deaths to escape celebrity life and now they’re living it up on a desert island?

This summer you are invited to take a once-in-a-lifetime trip to an extraordinary island paradise where sixteen supposedly dead exist in glorious anonymity – otherwise known as Dead Star Island.

Elvis is here, so are John, Diana, Keith and the parties are wild…

That is, until someone starts killing them off for real.

Now Greece’s former top cop Mario Gunzarbo is called in to solve the mystery of the Déjà vu Killer. But can the part-time tennis coach and full time alcoholic stop the killer in time to save the rest of the superstars?

Dead Star Island, published by APP, can be ordered through Amazon priced £4.99 for Kindle and £8.99 paperback: http://www.amazon.co.uk/Dead-Star-Island-Andrew-Shantos/dp/0992811627

Fans can take a virtual tour of the island, meet its inhabitants and even apply for residency at andrewshantos.com. Dead Star Island video: https://youtu.be/8OL_PuG-asg

My thanks to Andrew and to Katy Weitz @GhostwriterBook for their kind invitation to join this exciting book tour.


Do visit the other blogs on the tour.