Jaffareadstoo is delighted to be hosting today's first stop on 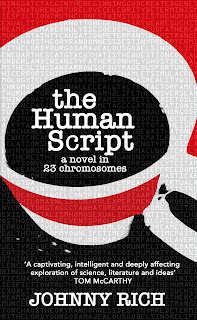 and to welcome the author 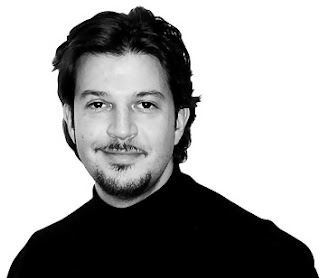 Today Johnny is sharing with us how he found the inspiration for his novel.....

I’m going to tell you a lie. Forgive me. It’s in a good cause. The lie is that the inspiration for my novel, The Human Script, came to me in a dream.

It sounds credible enough. I certainly have come up with short stories in my sleep. But they are half-formed blobs of ideas. As I try to trap them in words, they slip through my fingers. The nonsenses and plot holes that never bother us in dreams mock me from the page. By the time such stories have been wrangled into readability, they look no more like their inspiration than a roast chicken resembles an egg.

Let’s try another lie. An anecdote. A boy of ten or thereabouts – me – sits, cross-legged, in school uniform shorts, homework done, tea eaten, in front of the wood-framed TV. On the screen, Tomorrow’s World, a show that popularised science through mind-blowing innovations like CDs and automatic doors. On this episode, they had a vivarium of toads, which, they claimed with rehearsed awe, were ‘clones’. This was long before Dolly the Sheep – identical amphibians were an earlier milestone in genetic experimentation.

One toad was stretching up the side as if trying to escape. Another sat grumpily watching. A third was scraping at the gravel. As the presenter explained the marvels of their similarity, I was struck only by how differently they behaved. If they are identical, I thought, why aren’t they all doing the same thing? Maybe, I wondered, the simple difference was that they couldn’t be in the same place at the same time. That small difference made all the difference.

From such things thoughts are sparked. Thoughts grow into ideas. Ideas beg for expression and sprout stories. This is such stuff as novels are made of.

The curious musings of a boy were themselves the small difference that sparked a fuse of thought that ended in a novel that asks about how one thing causes another. Where the movie Sliding Doors asks, ‘what if?’, The Human Script asks, ‘Could it ever have been otherwise?’

One more lie: there was no inspiration, no cause. Just imagination. I made it up, conjured it, out of nothing. Stare blankly out of a window long enough and your mind will start to travel down paths of barely connected thought. Capture that butterfly of thought at the right moment and you will not crush its wings. Like a hurricane caused by the butterfly flapping, or like a universe sprung from a big bang of pure energy, a fictional world can grow from a scintilla.

But can that be true? Can something come from nothing? Surely, there had to be something to put the butterfly there in the first place? A caterpillar, of course, but what was before that? We’re back to chickens and eggs.

The truth is I cannot say what my inspiration was. Like all fiction, my lies are just my efforts to be truer than the truth.

There was no single event that set my ideas in motion. My whole life (and indeed those of countless generations before me) conspired to make The Human Script the story that I wanted to tell. That is not to say all creation existed for this purpose, merely that I and my novel are by-products of existence.

As it dawned on me that I had made the decision to write it (a realisation that emerged, rather than a moment of revelation), I then needed to take hold of the reins of my inspiration. I researched, spent time with geneticists, a Calvinist minister. I even pretended to be homeless one night. New inspirations sprang on me.

It was an adventure, but I can’t honestly say when it started, where, when or how. Nor if it’s over.

Have you ever felt like that yourself? Not entirely in control. Not exactly reeling, but unsure why you do stuff? Why stuff happened? Not imprisoned, but not free either. Like the world might be your oyster, but you’re stuck inside its shell.

If so, The Human Script is a story that will explain why you feel like that. I guarantee it will change your life, but only because everything does, however small.

Johnny Rich is the author of TheHuman Script, published by Red Button Publishing, available now in paperback (£9.99) and eBook (£2.99) formats.

To celebrate the launch of the paperback the author will be reading extracts from the novel followed by a Q&A on 17 November 2015 at the Betsey Trotwood, 56 Farringdon Road, London EC1R 3BL.

To find out more and to book tickets, visit: http://bit.ly/humanscriptlaunch


Please take a look at the other blog tour stops 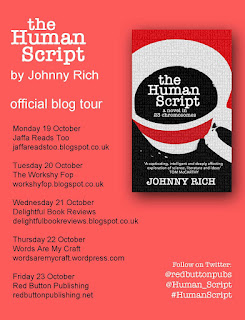 My thanks to Johnny for his guest post and to Karen at Red Button Publishing for the invitation to join in with this fun event.

My thoughts about The Human Script

I was bit out of my comfort zone with this novel and for a time it took me a while to feel really comfortable with the story. That's not to say the book is badly written, far from it, it's really very cleverly put together, it's more that my involvement in the story took a while to develop.

Chris Putnam is a scientist working on the Human Genome Project. On the surface he seems an average young man but he is troubled by indecision and feels that his life is drifting aimlessly. He fears the loss of stability which is further compounded by the ending of a relationship and the loss of his father. Changes in circumstance force Chris into making some difficult decisions.

This is a slow burner of a novel which takes a while to really get going but I'm glad I stuck with the story and commend the author on an original and highly innovative novel.