Blog Tour ~ A Walk along the Beach by Debbie Macomber ☼

☼ Delighted to host today's summery Blog Tour Stop ☼
A heart-warming tale of the love of sisters and finding inner strength you didn’t know you had from bestseller Debbie Macomber
Sisters Willa and Harper mean the world to each other.
Inseparable since the loss of their mother as teenagers, the Lakey sisters are perfect opposites. Quiet, demure Willa has always admired Harper's sense of adventure. She enjoys her peaceful routine as a café owner in their coastal hometown of Oceanside.
When a handsome customer shows interest in Willa, Harper urges her sister to take a chance on love. Then Harper receives crushing news that threatens to bring everything to a halt.
Only by supporting each other will the sisters be able to face the trials to come. And though the time ahead may be tough, Willa and Harper will discover that the darkest times can lead to the most beautiful rewards.
What did I think about it..
A Walk along the Beach sees a welcome return to Oceanside in the Pacific North West, back to the small coastal town we first discovered in Cottage by the Sea. I liked the fleeting glimpses of those characters we met previously in Cottage by the Sea, especially Doctor Annie and her husband Keaton, but of course, it is Willa, Harper, Sean, Bandit the dog  and Snowball the cat who stole my heart in A Walk along the Beach.
In this visit to Oceanside we meet sisters, Willa and Harper Lakey. Willa runs Bean There, a thriving coffee shop, whilst Harper teaches yoga and fitness classes at the Oceanside Fitness Centre. Both women are extremely supportive of each other and their love shines through, especially as Willa has always looked after her younger sister. Harper is determined to set Willa up with a suitable date, and Willa is equally determined not to be pulled into any of Harper’s scheming ideas, but then fate has a nasty way of interfering and both Willa and Harper have some life challenges ahead of them.
This is a lovely story, desperately sad in places, I definitely needed a whole box of tissues, but throughout the book, the message that we should cherish those who are important to us comes across loud and clear. In any other writer’s hands this story could come across as mawkish and sentimental, but this is just so beautifully written that even the sad bits were totally enjoyable.
A Walk along the Beach is a love story, between siblings, boyfriend and girlfriend, fathers and daughters but mostly it’s about sisters, supporting, arguing, being there for each other, and the ultimate sadness of having to let go of someone when with every ounce of strength you want to hold them forever in your heart ♡
There’s something about reading a Debbie Macomber book that is exactly like taking your favourite fluffy blanket, a family size packet of chocolate biscuits and retreating to your most comfortable armchair. There is never a moment when the warmth of the story doesn’t pull you into a make believe world which is always totally believable.
Despite the tears, I closed the book with a massive sigh of pleasure ♡
About the Author

Debbie Macomber is a No. 1 New York Times bestselling author of over 100 books, and one of today’s most popular writers. In addition to fiction, Debbie has also published two bestselling cookbooks; numerous inspirational and nonfiction works; and two acclaimed children’s books. The beloved and bestselling Cedar Cove series became Hallmark Channel’s first dramatic scripted television series, and was ranked as the top program on US cable TV when it debuted in summer 2013. Debbie also owns her own tearoom and a yarn store, A Good Yarn, named after the shop featured in her popular Blossom Street novels. A devoted grandmother, Debbie and her husband Wayne live in Port Orchard, Washington (the town on which her Cedar Cove novels are based) and winter in Florida.
Twitter @debbiemacomber #AWalkAlongTheBeach
Facebook
@arrowpublishing
Website
Amazon UK 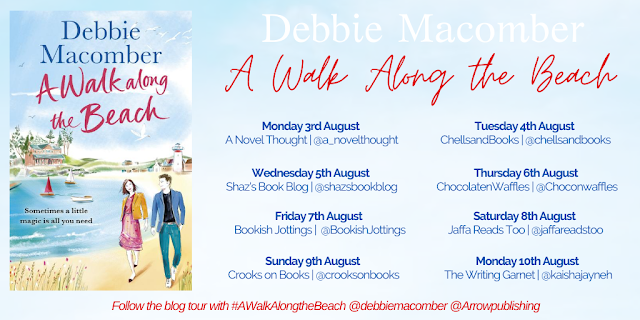