The evocative vocabulary, wit and wisdom of the Scots language – from Robert Burns to Twitter.
Scottish writer and bookseller, Robin Crawford, has gathered 1,000 Scots words – old and new, classical and colloquial, rural and urban – in a joyful celebration of their continuing usage. His amusing, erudite definitions put each of these words in context, revealing their evocative origins and essential character. Delightful line drawings by Scottish printmaker Liz Myhill contribute to this treasury of linguistic gems for language lovers everywhere.
The Scots language is intricately bound up in the nation’s history, identity, land and culture. It is also a living and vital vernacular, used daily. With references to Robert Burns mingling with contemporary examples from Billy Connolly and even Monty Python, Cauld Blasts and Clishmaclavers revels in the richness of one of our oldest languages, and acts as a precious reminder of words that are also beginning to fade away, their meaning and value disappearing.
Clishmaclaver: the passing on of idle gossip, sometimes in a book.
Inkie-pinkie: weak beer.
Sodie-heid: literally, ‘head full of soda bubbles’, airhead.
Smowt: youngster, technically a young trout or salmon but also affectionately applied to a child.
Simmer dim: Shetland term for long summer evenings where due to the northern latitude it never really gets dark.
Dreich: grey, miserable, tedious; usually applied to weather but indicative of the Scots temperament, hence it being voted Scotland’s favourite word in a recent poll (or perhaps indicative of the temperaments of Scots who feel the need to participate in online polls): ‘It’s gey dreich the day'
What did I think about it..
Long before relying on spell check on a computer I can remember having school lessons dedicated to how to use a dictionary. Looking up words, and their meanings, was taken very seriously, and I think this useful skill definitley fostered my love of words and their usage.
This treasury of 1,000 Scottish words has been a real delight to read, easy to peruse whether looking up a specific word, and believe me there are some amazing words I'd never seen before, or, starting at the very beginning with a',aa,or aw which means all, to yowe trummale which means unseasonably cold weather in early summer, something I'm used in the north of England! Incidentally, there's nothing in the treasury beginning with the letter z!
I really did begin at the beginning though and throughout the treasury I discovered words which made me smile, words that I use everyday and words that I had, quite simply, never seen before and which I would hope one day to be able to sneak into conversation - words like breenge which means to plunge and rush, or ficherie which means fiddly, fussy or finicky, and stooshie which is a to-do or commotion.
The rich vernacular that we associate with this lyrical language is fully explored and the author has been very thorough in his research and includes, alongside words and their meaning, some interesting contextual snippets of information about their origin and usage of specific words in literature, rhymes and drama.There's also a bit of a help with some pronunciation which has been especially useful to this Sassenach with how to actually say a specific word - for example, ceud-mille-failte becomes instantly pronounceable as ki-ool-a-meel-a-fell-cha and Slainte/slainte mhath - a term so often used in my favourite Outlander novels, becomes much easier as slange /slan-ja-vah.
Cauldblasts and Clishmaclavers is a fascinating journey through the romantic lyricism of the Scottish vernacular. Intricately exploring its richly evolving history in an easy to use treasury which both educates and entertains in equal measure.
About the Author
Born in Glasgow, writer and Scottish bookseller Robin A. Crawford has a particular interest in the culture and natural heritage of his native land. He is the critically acclaimed author of Into The Peatlands: A Journey Through the Moorland Year, longlisted for the Highland Book Prize 2019. He lives in Fife, Scotland, with his wife.
Website
Twitter @RobinACrawford2 #Cauldblasts
@eandtbooks 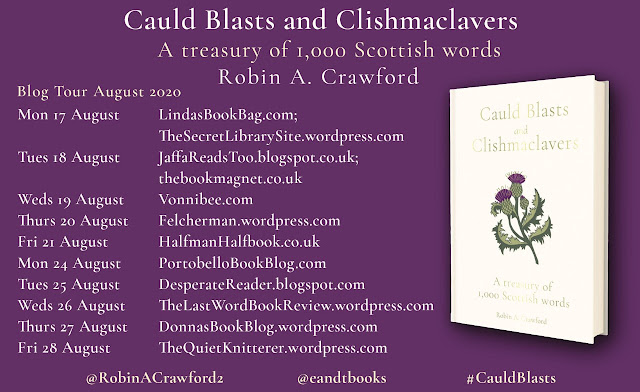