At the intimate house-warming party for her glorious ‘grand design’, Kathleen confides in her best friend Beth that she is terrified of one of their close friends, but daren’t reveal which one. The guests are a tight-knit group, but Kathleen is convinced one of them is dangerous.
The next day Kathleen’s body is found at the foot of a cliff and Beth must face the sickening truth that she may have been killed by one of their trusted friends. With little help from the police, Beth’s decides to seek answers.
All the friends have secrets they are desperate to hide, but only one of them is ready to kill to keep theirs safe…

What did I think about it..
At the house-warming party of Kathleeen's spectacular new coastal home on the Isle of Wight, she confides to her friend, Beth that she is very frightened of one of her guests but she doesn't go into detail and won't tell Beth anything more about why she is so terrified. Early the following morning Kathleen's body is found at the foot of a cliff and whilst the evidence could indicate a dreadful accident,  it could also point towards something far more suspicious. Beth is determined to do all she can to get to the truth of the matter.
The House Party is a delicately plotted suspense story which looks at the minutiae of the lives of those close friends and family who attended Kathleen's house-warming party. As the story progresses it becomes obvious that all these guests have something to hide and I enjoyed following in Beth's footsteps as she does her best to deal with her own grief at losing a close friend whilst at the same time questioning everything she once thought was true about her relationship with the other house party guests. I enjoyed observing how this small fictional town, with its share of do-gooders and gossipmongers, starts to reveal its closely held secrets.
The story is something of a slow mover, which I think is quite deliberate, as it allows an introspective look at all those characters who could have wanted to do Kathleen harm. The tension builds gradually and there are some interesting layers of suspicion so that for a while I really had no idea who, or what, was responsible for Kathleen's untimely demise.
Part psychological suspense and part cosy crime mystery, The House Party is an interesting debut novel. I look forward to seeing just what this emerging author does next 😊
About the Author 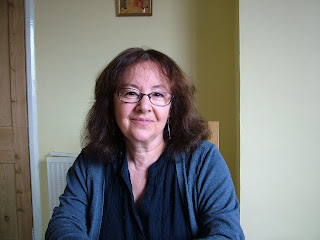 Mary Grand is the author of five novels and writes gripping, page turning suspense,with a dark and often murderous underside. She grew up in Wales, was for many years a teacher of deaf children and now lives on the Isle of Wight where her new novel,
The House Party, is published by Boldwood in July 2020 and is set on the Isle of Wight. Insular, claustrophobic, and with nowhere to run. Mary Grand has written a heart stopping novel of secrets, betrayal and desire, perfect for fans of Louise Candlish and Lucy Foley.
Twitter @authormaryg
Facebook
Instagram
Book Bub
Website