Blog Tour ~ The Last to Know by Jo Furniss ☼

☼ Thrilled to be hosting today's Blog Tour stop ☼
A family’s past pursues them like a shadow in this riveting and emotional novel of psychological suspense by the Amazon Charts bestselling author of All the Little Children.
American journalist Rose Kynaston has just relocated to the childhood home of her husband, Dylan, in the English village of his youth. There’s a lot for Rose to get used to in Hurtwood. Like the family’s crumbling mansion, inhabited by Dylan’s reclusive mother, and the treacherous hill it sits upon, a place of both sinister folklore and present dangers.
Then there are the unwelcoming villagers, who only whisper the name Kynaston—like some dreadful secret, a curse. Everyone knows what happened at Hurtwood House twenty years ago. Everyone except Rose. And now that Dylan is back, so are rumors about his past.
When an archaeological dig unearths human remains on the hill, local police sergeant Ellie Trevelyan vows to solve a cold case that has cast a chill over Hurtwood for decades.
As Ellie works to separate rumor from fact, Rose must fight to clear the name of the man she loves. But how can Rose keep her family safe if she is the last to know the truth?
What did I think about it..
Dylan Kynaston returns with his wife, Rose and young son Aled, to Hurtwood House, his family home in Shropshire. In this sleepy English village Rose feels something of an outsider, especially as her American accent sets her apart, and yet her journalistic juices are intrigued by the secretive element of the place and the way that the very name of Kynaston sends a ripple of unease whenever it is mentioned.
There’s much to consider within the novel, not only about the myths and folklore which give the novel a darkly gothic feel but there are also some deeply concerning issues to sort out within the family as Dylan’s mother, Gwendoline, is facing her own dark battles, and the hint of a troubled past only serves to heighten the tension.
There’s even further intrigue when an archeological dig brings an added complication with the  unearthing of human remans, and local police sergeant, Ellie Trevelyan, gets drawn into a complicated investigation. Learning the secrets of this gloomy village only heightens the tension and the author does a great job in bringing both place and people alive whilst at the same time intertwining some dark secrets from the past which have a focus on what is happening in the present.
I enjoyed the ease of story-telling and the way that the many twists and turns kept me guessing. As each secret is revealed, so the suspense of the novel gets a little bit darker and much more complicated. The Last to Know is a multi layered suspense thriller with a dark and gloomy edginess which kept me interested from first page to last.
About the Author 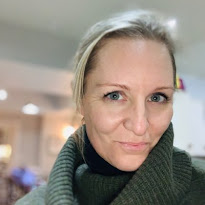 After spending a decade as a broadcast journalist for the BBC, Jo Furniss gave up the glamour of night shifts to become a freelance writer and serial expatriate. Originally from the United Kingdom, she spent seven years in Singapore and also lived in Switzerland and Cameroon. As a journalist, Jo worked for numerous online outlets and magazines, including Monocle and the Economist. She has edited books for a Nobel laureate and the palace of the Sultan of Brunei. She has a Distinction in MA Professional Writing from Falmouth University. Jo's debut novel, All the Little Children, was an Amazon Charts bestseller.
Twitter @Jo_Furniss #TheLastToKnow
Website
Facebook 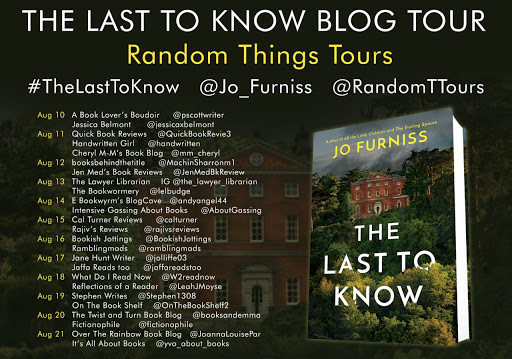