Blog Tour ~ This Time Next Year by Sophie Cousens ☼

☼ Delighted to host today's stop on this blog tour ☼
Get ready to fall for this year's most extraordinary love story...
Quinn and Minnie are born on New Year’s Eve, in the same hospital, one minute apart.Their lives may begin together, but their worlds couldn’t be more different. Thirty years later they find themselves together again in the same place, at the same time.
What if fate is trying to bring them together?
The clock strikes midnight, their moment passes, and another year begins. But if Quinn and Minnie are from different worlds, why do they keep bumping into each other? And why is it that each frustrating interaction somehow seems to push their lives in the right direction? Could it be that instead of clashing, their different outlooks might complement each other?
Perhaps now is the time to take a chance... 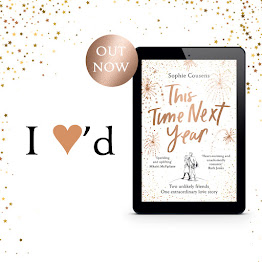 What did I think about it..
With a name like Minnie Cooper how could you fail to be anything but quirky and a little bit different and such is the case for Minnie who we first meet on a disastrous New Year's Eve in 2019. It's disastrous for many reasons but the main one is that Minnie's birthday is the first of January and she always knows that something is going to go badly wrong, after all, it has done since she was pipped to the post of being the first baby born in 1990 by Quinn Hamilton.
Thirty years on and Quinn and Minnie meet again in a chance encounter and thereafter their lives are intertwined in the most unexpected ways. That they are both very different people from different social backgrounds only adds to the general interest in this lighted hearted rom-com which has all the necessary ingredients to keep you entertained right from the first page.
I liked Minnie from the start, she's a great character who appears totally disorganised but together with her best friend, Leila, Minnie runs her No Hard Fillings business making pies for the needy with common sense and a heart of gold. Running a small local business isn't easy and I think the author has explored this really well showing just what Minnie and Leila have to do to survive but it is in the connection between Minnie and Quinn where the story has its heart and soul.
The story jumps around in time and it took me a little while to get used to this but once I had it all firmly established, I found the whole story well written and entertaining. There's lots of stuff about families and how both Minnie and Quinn are affected by what's going on in their very different lives. I especially enjoyed the connection between Quinn's mother, Tara, and Minnie's mother, Connie, whose first meeting was way back in 1989 at the maternity hospital when they were both expectant mothers but whose lives subsequently couldn't be more different.
This Time Next Year is a lovely, debut novel about taking the chances that life offers, and the importance of  love, friendship and family.
About the Author
Sophie Cousens worked as a TV producer in London for more than twelve years and now lives on the island of Jersey in the UK, balancing her writing career with working for an arts charity and taking care of her two small children. This Time Next Year is her first novel.
Twitter @SophieCous #ThisTimeNextYear
@ArrowPublishing 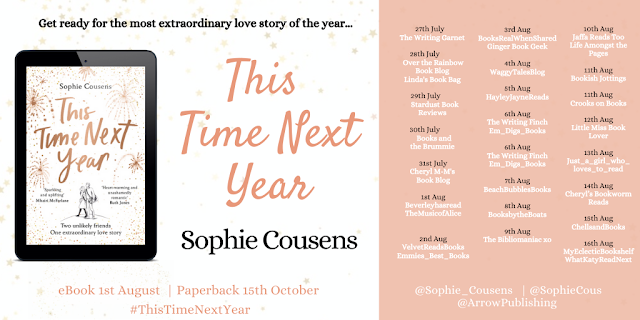