☼Delighted to host today's Blog Tour stop ☼
Deal, Kent, 1812
Eighteen-year-old Winnie Lennicker yearns for a peaceful life as a respectable married woman. However, when she becomes involved in her family's free-trading operations and caught by the Revenue, she is sent before the magistrates. Forced to confess that she is with child, now more than ever, Winnie is determined to give up smuggling. But the only way she can support herself and her unborn child is to carry on.
An opportunity presents itself to carry despatches on behalf of British agents and spies, and gold for Wellington's army. Needing the money, Winnie can’t afford to refuse, but the journey across the Channel is treacherous. When Winnie discovers the despatches she’s carrying aren’t what they seem, she’s determined to right her wrongs in the hope of achieving her dream and leaving the free trade behind for good.
What did I think about it..
Winnie Lennicker is brought before the magistrate and found guilty of obstruction and sentenced to an hour in the pillory. Being pelted with rotting fruit and vegetables does nothing to help Winnie’s sombre mood nor does the fact that everyone now knows that she is going to have a baby out of wedlock. Determined to pull herself out of the free-trade business and being forever at the mercy of the law, Winnie has a choice to make, either she continues with smuggling and risk punishment from hiding contraband, or she finds a way to get out in order to bring her baby up in safety.
There’s a authentic sense of atmosphere and the author, with some fine detailing, brings the history of this early part of the nineteenth century accurately alive. The setting of the story during the Napoleonic war with France highlights the dilemma faced by Winnie as she gets drawn into carrying dispatches on behalf of British agents and spies across the channel. The lively adventure which follows proves just how strong the women folk were during this troubled time. I enjoyed getting to know the Lennicker sisters, especially Winnie who is a strong and determined character.
The Golden Maid is an interesting historical saga which continues the trilogy begun in The Lace Maiden, and whilst it would have been helpful to have read the first book it’s by no means essential as the author includes some references to what has gone before so, once I had the characters firmly fixed in my head, I was able to read this as a stand-alone story without any difficulty.
Overall this is a good blend of history and mystery in a historical saga which entertains from start to finish.
About the Author
Evie Grace was born in Kent, and one of her earliest memories is of picking cherries with her grandfather who managed a fruit farm near Selling. Holidays spent in the Kent countryside and the stories passed down through her family inspired her to write her Maids of Kent trilogy. Evie now lives in Devon with her partner and dog. She has a grown-up daughter and son.She loves researching the history of the nineteenth century and is very grateful for the invention of the washing machine, having discovered how the Victorians struggled to do their laundry.
Twitter @ArrowPublishing #TheGoldenMaid 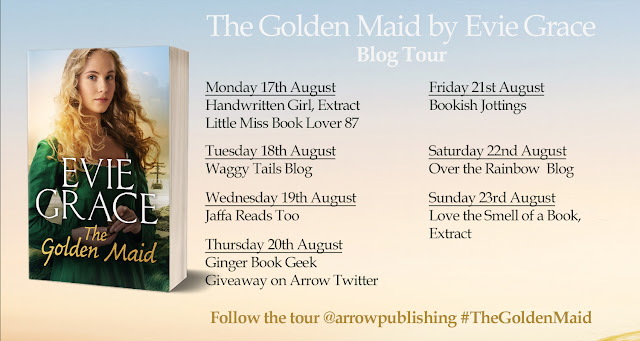