Two Isobels. A lifetime of regret. A love that spans the years

In 1938, as the world hurtled towards war, twenty-year-old Isobel MacDonald fell madly in love. But fate and her own actions conspired to deny her the happiness she yearned for. Many years later, plagued with regrets and with a shrill voice from the past ringing in her ears, she documents the events that shaped her life.

In 2015, sixty-five-year-old Bel Davison returns from Australia to her native Scotland to visit her terminally ill aunt. Reading Isobel’s memoir, she is beset with memories of her own childhood and overcome with guilt. When she meets her aunt’s solicitor, events seem to spiral out of control and, almost against her will, she finds herself drawn to this enigmatic Scotsman.

What is it that links these two women across the generations? Can the past influence the future?

There's always something fascinating about reading a dual time story which intertwines the stories of two very different characters, whose shared connection to the past encroaches on the future. In The Good Sister, the author has once again brought us two memorable female characters and, as we discover, both of the Isobel's, one in the 1940s, and the other in 2015, are joined by something which happened decades ago, in the past.

The story splits its time between past and present and the author does a good job of allowing both women to have their voice. Time and place are represented well, and, over the course of the story,  I enjoyed getting to know both of the characters and enjoyed seeing just where the events of the story would take them.

The author writes this type of fiction, featuring more mature heroines, really well and it is to her credit that she allows the story to unfold in a rather gentle manner, which makes for very pleasant reading.

The Good Sister is a lovely, family saga for a cold and wintery afternoon and is the author's first foray into writing historical fiction. I hope it won't be her last. 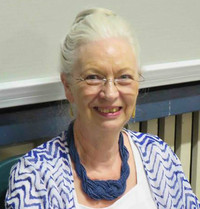